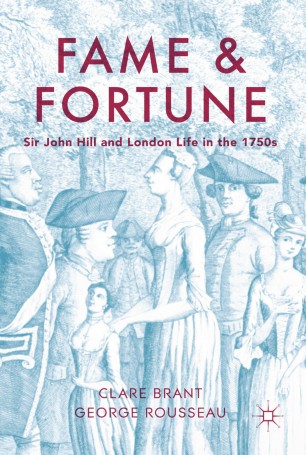 Sir John Hill and London Life in the 1750s

This multi-disciplinary essay collection explores the controversial life and achievements of Sir John Hill (1714–1775), the prolific contributor to Georgian England’s literature, medicine and science. By the time he died, he had been knighted by the Swedish monarch and become a household name among scientists and writers throughout Britain and Europe.

Hill, an important writer of urban space, also helped define London through his periodicals and fictions. As well as examining his significance and achievements, his vilification and rise to celebrity, this book makes Hill a means of exploring the lively intellectual and public world of London in the 1750s where rivalries abounded, and where clubs, societies, coffee-houses, theatres and pleasure gardens shaped fame and fortunes. By investigating one individual’s intersections with his metropolis, Fame and Fortune restores Hill to view and contributes new understandings of the forms and functions of eighteenth-century intellectual worlds.