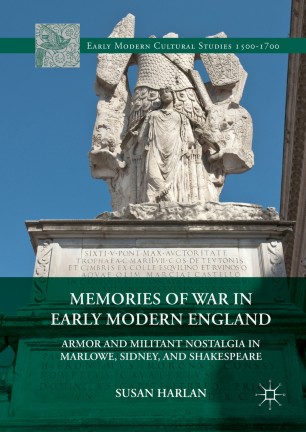 Armor and Militant Nostalgia in Marlowe, Sidney, and Shakespeare

This book examines literary depictions of the construction and destruction of the armored male body in combat in relation to early modern English understandings of the past. Bringing together the fields of material culture and militarism, Susan Harlan argues that the notion of “spoiling” – or the sanctioned theft of the arms and armor of the vanquished in battle – provides a way of thinking about England’s relationship to its violent cultural inheritance. She demonstrates how writers reconstituted the spoils of antiquity and the Middle Ages in an imagined military struggle between male bodies. An analysis of scenes of arming and disarming across texts by Christopher Marlowe and William Shakespeare and tributes to Sir Philip Sidney reveals a pervasive militant nostalgia: a cultural fascination with moribund models and technologies of war. Readers will not only gain a better understanding of humanism but also a new way of thinking about violence and cultural production in Renaissance England.