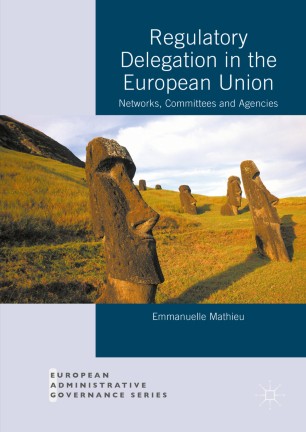 Regulatory Delegation in the European Union

This book addresses the regulatory capacity of the EU as it responds to the huge challenge of realizing the single market. It explores its weaknesses, the EU regulatory networks, expert committees and EU agencies formed in response, and the exceptionally large and complex transnational regulatory system which has resulted. It defines the EU regulatory space as a multi-faceted phenomenon of institutional expansion whose shape varies across sectors and changes over time. Empirically based on the exploration of how regulatory delegation has emerged and evolved in three key EU policies (food safety, electricity, and telecommunications), the book disentangles and links together the functional, institutional and power-distributional factors and their interplay over time into a unified explanation of the many faces of the EU regulatory space.

Emmanuelle Mathieu is a postdoctoral research fellow at the German Research Institute for Public Administration, Speyer, Germany. She holds a PhD from the European University Institute, Italy, and has previously worked as a researcher at the Université Catholique de Louvain, Belgium. Her work covers the areas of EU public administration and EU regulatory governance.