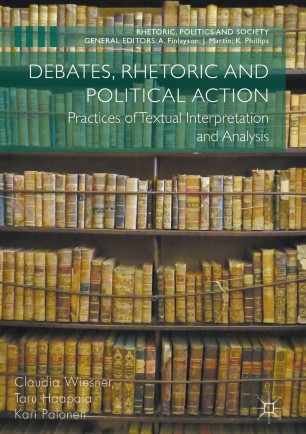 Practices of Textual Interpretation and Analysis

This book explicates how debates and documents can be understood, interpreted and analysed as political action. It offers the reader both a theoretical introduction and practical guidance. The authors deploy the perspective that debates are to be understood as political activity, and documents can be regarded as frozen debates. The first chapter discusses what is to be understood as politics and political. The second chapter explains the concept of debate as an exchange of arguments in speaking pro and contra. The third chapter presents concrete approaches, research practices and experiences that help analysing debates and documents as politics. The fourth chapter consists of a number of case studies that demonstrate how researchers can proceed in analysing parliamentary debates, documents, laws, and media articles. This book will be of use to all students and scholars interested in analysing texts and documents, as well as in political rhetoric and parliamentary debates.

Taru Haapala is Research Fellow in Political Science at the University of Jyväskylä, Finland, and a Junior Visiting Fellow at the Queen Mary Centre for the Study of the History of Political Thought, University of London.

Kari Palonen has been Professor of Political Science at the University of Jyväskylä, Finland, since 1983, from 2015 with an emeritus contract. He has been Academy of Finland Professor for two five-year periods, and Director of the Finnish Centre of Excellence in Political Thought and Conceptual Change.

“This book is far reaching, in both its scope and depth. It effectively engages with rhetoric in political debate on a series of levels and is very clearly structured, with the arguments well-presented and corroborated throughout. The depth is apparent in a multi-disciplinary approach where parallels are found across the social sciences and indeed into the realms of theatre and literature.” (Dr Paul Rowinski, University of Bedfordshire, UK)
Buy options