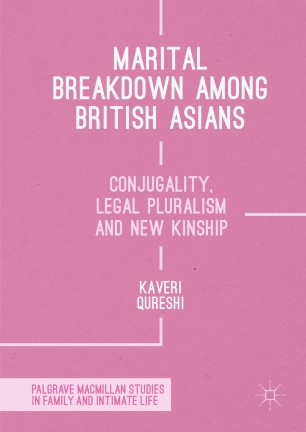 Against long-standing characterizations of British Asians as ‘flying the flag’ for traditional life, this book identifies an increase in marital breakdown and argues to reorient debates about conservatism and authoritarianism in British Asian families. Qureshi draws on a rich ethnographic study of marital breakdown among working class Pakistani Muslims in order to unpick the grounds of marital conflict, the manoeuvres couples undertake in staying together, their interactions with divorce laws and their moral reasonings about post-divorce family life. Marital Breakdown among British Asians argues against individualization approaches, demonstrating the embeddedness of couples in extended family relations, whilst at the same time showing that Pakistani marriages and divorces do not deviate in all respects from wider marital separation trajectories in Britain. Providing new insights into how marital breakdown is changing the contours of British Asian families, this book will be essential reading for scholars and students, clinicians working in couple or family therapy, social workers and legal practitioners.