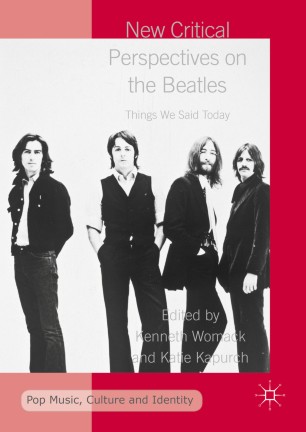 New Critical Perspectives on the Beatles

The Beatles are probably the most photographed band in history and are the subject of numerous biographical studies, but a surprising dearth of academic scholarship addresses the Fab Four. New Critical Perspectives on the Beatles offers a collection of original, previously unpublished essays that explore 'new' aspects of the Beatles. The interdisciplinary collection situates the band in its historical moment of the 1960s, but argues for artistic innovation and cultural ingenuity that account for the Beatles' lasting popularity today. Along with theoretical approaches that bridge the study of music with perspectives from non-music disciplines, the texts under investigation make this collection 'new' in terms of Beatles' scholarship. Contributors frequently address under-examined Beatles texts or present critical perspectives on familiar works to produce new insight about the Beatles and their multi-generational audiences.
Kenneth Womack, Ph.D. is Dean of the Wayne D. McMurray School of Humanities and Social Sciences at Monmouth University, where he also serves as Professor of English. He is the author or editor of numerous books, including Long and Winding Roads: The Evolving Artistry of the Beatles(2007), the Cambridge Companion to the Beatles (2009), and The Beatles Encyclopedia: Everything Fab Four (2014). Womack is also the author of three award-winning novels, including John Doe No. 2 and the Dreamland Motel (2010), The Restaurant at the End of the World (2012), and Playing the Angel (2013). He serves as Editor of Interdisciplinary Literary Studies: A Journal of Criticism and Theory, and as Co-Editor of the English Association's Year's Work in English Studies.
Katie Kapurch, Ph.D. is Assistant Professor of English at Texas State University. She has published es