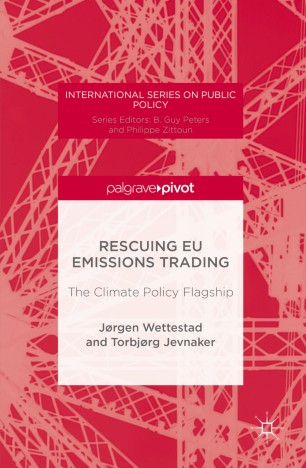 ‘The authors have followed the ins-and-outs and many twists of the EU Emissions Trading System story, writing with curiosity, insight, detail and wit about the complicated European coalitions that delivered the “mission possible” back-loading and market stability reserve reforms. Not only researchers, but also participants to the process can learn something about how we got to where we stand today.’ – Jesse Scott, Head of Environment at Eurelectric 2012-14

‘Europe’s Emission Trading Scheme is the world’s biggest attempt to use markets to cut pollution. This timely and important book shows how smart political engineering has led to radical reforms that are saving Europe’s trading system and making it, once again, a model for many other countries.’ – David G. Victor, Professor, School of Global Policy and Strategy, UC San Diego, USA

'Another book on the EU’s Emissions Trading Scheme? Yes, and Wettestad and Jevnaker demonstrate the added value! They deliver a fascinating analysis of recent developments of the EU flagship climate policy that has much to tell. Their systematic study reveals the undercurrents that have driven recent ETS policy development and are likely to remain relevant for EU climate policy in future.' – Sebastian Oberthür, Professor, Institute for European Studies, Vrije Universiteit Brussels, Belgium

This book tells the fascinating story of how the EU’s emissions trading system – its climate policy flagship - was rescued. In spring 2013 the ETS was in severe crisis, with a huge surplus of allowances and a sagging carbon price. Even a formally simple measure to change the timing of auctioning was initially rejected by the European Parliament. Two years later a much more important ‘market thermostat’ was adopted (i.e. the Market Stability Reserve) and proposals for a complete ETS overhaul were put on the table. This book examines and explains how it was possible to turn the flagship around so quickly. Crucial changes at national and EU levels are identified, chief among them in Germany and the European Parliament.

Jørgen Wettestad is Research Professor at the Fridtjof Nansen Institute in Oslo, Norway.  He has published several books and numerous articles on international and EU environmental policy, with particular attention to emissions trading.

Torbjørg Jevnaker is Research Fellow at the Fridtjof Nansen Institute in Oslo, Norway. She has contributed to books and journals on EU energy and environmental policy, particularly emissions trading, climate and energy packaging and internal energy market policy.