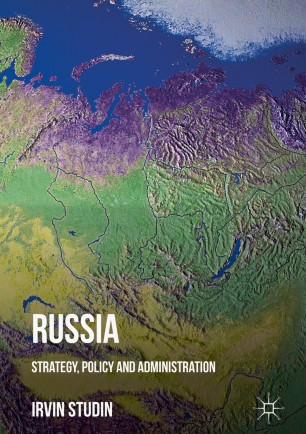 ‘In this major book, Irvin Studin, one of his generation’s top international policy thinkers, brings together Russia’s leading thinkers and specialists to tell us about how this massive, mysterious, and hyper-complicated country, in its many dimensions, works and can, in very practical terms, be improved. Studin’s book is a must read for anyone who truly wants to understand Russian strategy, policy and administration beyond the surface level, and indeed for all those who want to learn where the world is headed in the first part of the 21st century."
– Hubert Védrine, former Foreign Minister of France
'The timing of this book could not have been better planned.  Irvin Studin has brought together some of Russia's top thinkers at a time where, more than ever, we need to revisit our understanding of Russia.  Irvin Studin's sharp and thoughtful analysis allows to better grasp the impact of Russia on international politics.'
– Jean Charest, former Premier of Quebec, and former Deputy Prime Minister of Canada
'Russia: Strategy, Policy and Administration features arguably the best indigenous experts on Russia’s domestic policies and arrangements as well as on the county’s foreign and defence policies.  It is an authoritative source of first-hand information about how leading Russian analysts and advisers analyze both the challenges and opportunities that Moscow faces today, and what Russia really thinks about the world at large - its past, present and future.  The book is essential reading for anyone interested in going beyond standard newspaper headlines to really understand not only Russia itself, but also some of the most important trends in global politics in the first quarter of the 21st century.’
– Andrey Kortunov, Director General of the Russian International Affairs Council, Moscow
This book examines how Russia, the world’s most complicated country, is governed. As it resumes its place at the centre of global affairs, the book explores Russia’s overarching strategies, and how it organizes itself (or not) in policy areas ranging from foreign policy and national security to health care, education, immigration, science, sport, agriculture, the environment and criminal justice. The book also discusses the structures and institutions on which Russia relies in order to deliver its goals in these areas of national life, as well as what’s to be done, in policy terms, to improve the country’s performance in its first post-Soviet century. Edited by Irvin Studin, the book includes contributions from a tremendous list of Russia’s leading thinkers and specialists, including Alexei Kudrin, Vladimir Mau, Alexander Auzan, Simon Kordonsky, Fyodor Lukyanov, Natalia Zubarevich and Andrey Melville.
Irvin Studin is President of the Institute for 21st Century Questions and Editor-in-Chief and Publisher of Global Brief magazine, Toronto. Between 2014 and 2016, he was Professor of Public Policy in the Russian Academy of National Economy and Public Administration, Russia. He is also co-founder of Ukraine’s Higher School of Public Administration.