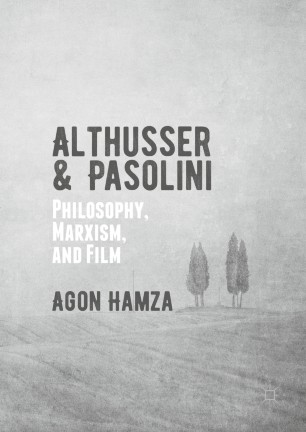 Agon Hamza offers an in-depth analysis of the main thesis of Louis Althusser’s philosophical enterprise alongside a clear, engaging dissection of Pier Paolo Pasolini’s most important films. There is a philosophical, religious, and political relationship between Althusser’s philosophy and Pier Paolo Pasolini’s films.  Hamza teases out the points of contact, placing specific focus on critiques of ideology, religion, ideological state apparatuses, and the class struggle. The discussion, however, does not address Althusser and Pasolini alone. Hamza also draws on Spinoza, Hegel, Marx, and Žižek to complete his study. Pasolini’s films are a treasure-trove of Althusserian thought, and Hamza ably employs Althusserian terms in his reading of the films. Althusser and Pasolini provides a creative reconstruction of Althusserian philosophy, as well as a novel examination of Pasolini’s film from the perspective of the filmmaker’s own thought and Althusser’s theses.