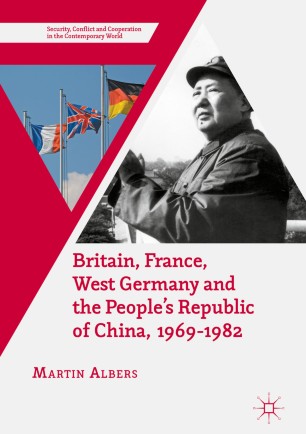 Part of the Security, Conflict and Cooperation in the Contemporary World book series (SCCCW)

This book shows how the China policies of the three biggest states in Europe – Britain, France, and the Federal Republic of Germany – helped China reintegrate into the international community in the 1970s.

With Europe being China’s most important trading partner, the economic and political significance of Sino-European relations is obvious. Yet very little is known about the history and origins of ties between Western Europe and the People’s Republic. Against the background of the Cold War, the end of Maoism, and the emergence of globalization, the governments in Bonn, Paris and London had to find ways of dealing with Europe’s declining influence and promote their own national interests in Asia.

Based on newly declassified government files, author Martin Albers argues that despite pursuing very different policies, these three governments supported a rapid expansion of peaceful exchange between the People’s Republic and Europe and substantially contributed to the success of Beijing's reform policy.

Martin Albers works for the Administration of the Free and Hanseatic City of Hamburg, Germany. Previously he worked for the German think-tank Friedrich-Ebert-Stiftung (FES). He holds a PhD from Cambridge University and his research interests include twentieth-century European history and contemporary relations between Europe and Asia.