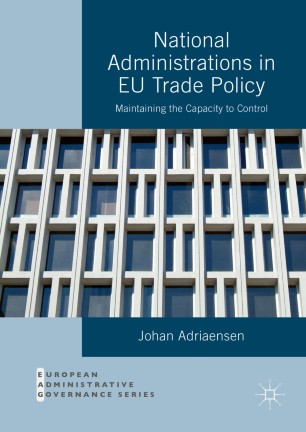 Maintaining the Capacity to Control

This book studies the relationship between administrative capacity and a member state’s influence in the European Union. More specifically, it studies member states’ ability to exert control over the European Commission during trade negotiations. But what determines administrative capacity and how do member states ensure their preferences are defended during trade negotiations? A combination of qualitative fieldwork and survey-analysis provides the answer. Interviews in Belgium, Poland, Estonia and Spain offer a privileged insight into the functioning of national trade administrations and its effects on their behavior in the Council of Ministers. Through survey data, these findings are further corroborated. The book is aimed at a readership interested in EU decision-making, negotiation theory, comparative public administration and the international political economy of trade.
Johan Adriaensen is a research coordinator at the Center for European Research in Maastricht (CERiM) at Maastricht University, the Netherlands. He has been a guest professor at the Universities of Antwerp and Leuven in Belgium. His research interests encompass international political economy, the institutions of the European Union and scholarship on teaching and learning.