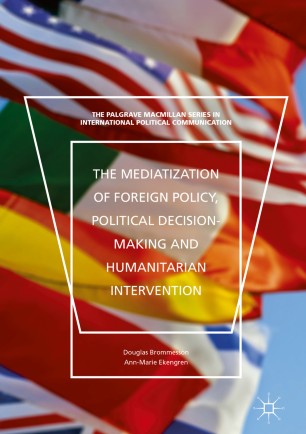 The Mediatization of Foreign Policy, Political Decision-Making, and Humanitarian Intervention

This book examines under what scope conditions foreign policy actors are more or less likely to adopt media logic. The authors analyze this media logic under three specific scope conditions: uncertainty, identity, resonance. First, they lay out the general adaptation of media logic in the general debate of the UN General Assembly 1992-2010. They then explore the adaptation of media logic under six different foreign policy decision-making processes in Finland, Sweden and the United Kingdom concerning the cases of humanitarian intervention in Côte d’Ivoire and Libya, both in 2011. The results of this study indicate the need to move beyond the assumption of a general process of mediatization affecting politics in total, across contextual factors. Instead, they point in the direction of a nuanced process of mediatization more likely under certain scope conditions and in certain political contexts.