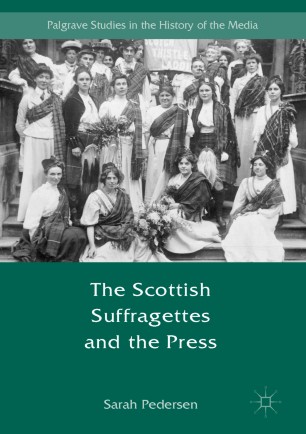 The Scottish Suffragettes and the Press

This book approaches the Scottish women’s suffrage campaign from the point of view of the popular press. It investigates how the press engaged with the women’s suffrage movement; how suffragettes were portrayed in newspapers; and how different groups attempted to use the press to get their message into the public sphere. Scottish suffrage campaigners acknowledged the need for press coverage from the start of the campaign in the 1870s, but the arrival of the militant suffragettes completely transformed newspaper coverage. The Scottish newspapers were particularly interested in suffragette activities during local by-elections and their hounding of local anti-suffrage MPs such as Herbert Asquith. The book also investigates the impact of the First World War on the movement.

Sarah Pedersen is Professor of Communication and Media at Robert Gordon University, Aberdeen, UK. Her research focuses on women’s engagement with the media, and she has published on this subject with reference to both historical and contemporary sources, including Edwardian newspapers, social media, online discussion sites and blogging.