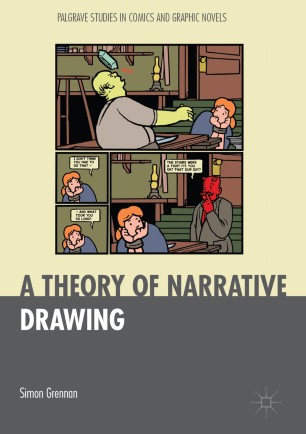 A Theory of Narrative Drawing

This book offers an original new conception of visual story telling, proposing that drawing, depictive drawing and narrative drawing are produced in an encompassing dialogic system of embodied social behavior. It refigures the existing descriptions of visual story-telling that pause with theorizations of perception and the articulation of form. The book identifies and examines key issues in the field, including: the relationships between vision, visualization and imagination; the theoretical remediation of linguistic and narratological concepts; the systematization of discourse; the production of the subject; idea and institution; and the significance of resources of the body in depiction, representation and narrative. It then tests this new conception in practice: two original visual demonstrations clarify the particular dialectic relationships between subjects and media, in an examination of drawing style and genre, social consensus and self-conscious constraint. The book’s originality derives from its clear articulation of a wide range of sources in proposing a conception of narrative drawing, and the extrapolation of this new conception in two new visual demonstrations.