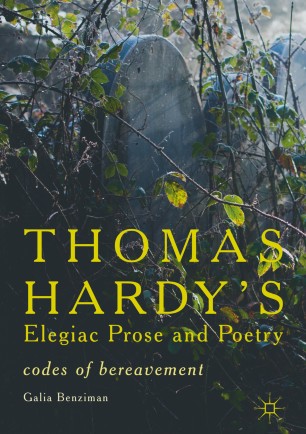 This book examines the transition from traditional to modern elegy through a close study of Thomas Hardy’s oeuvre and its commitment to mourning and remembrance. Hardy is usually read as an avowed elegist who writes against the collective forgetfulness typical of the late-Victorian era. But Hardy, as argued here, is dialectically implicated in the very cultural and psychological amnesia that he resists, as her book demonstrates by expanding the corpus of study beyond the spousal elegies (the “Poems of 1912-1913”) to include a wide variety of poems, novels and short stories that deal with bereavement and mourning. Locating the modern aspect of Hardy’s elegiac writing in this ambivalence and in the subversion of memory as unreliable, the book explores the textual moments at which Hardy challenges binary dichotomies such as forgetting vs. remembering, narcissism vs. unselfish commitment, grief vs. betrayal, the work of mourning vs. melancholia, presence vs. absence. The book's analysis allows us to relate Hardy’s elegiac poetics, and particularly his description of the mourner as a writer, to shifting late-Victorian conceptualizations of death, memory, art, science and gender relations.