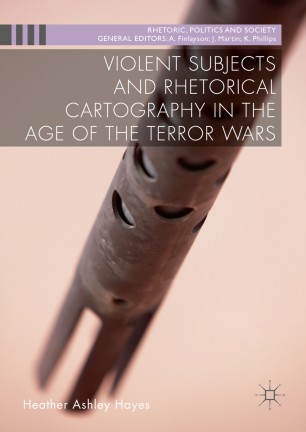 This work examines violence in the age of the terror wars with an eye toward the technologies of governance that create, facilitate, and circulate that violence. In performing a rhetorical cartography that explores the rise of the US armed drone program as well as moments of resistive violence that occurred during the Arab Spring directed at generating a counter-hegemony by Muslim populations, Hayes argues that the problem of the global terror wars is best addressed by a rhetorical understanding of the ways that governments, as well as individual subjects, turn to violence as a response to, or product of, the post September 11th terror society. When political examinations of terrorism are facilitated through understandings of discourse, Hayes argues, clearer maps emerge of how violence functions to offer mechanisms by which governing bodies, and their subjects, evaluate the success or failure of the “War on Terror.” This book will be of interest to public policymakers and informed general readers as well as students and scholars in the fields of rhetoric, political theory, critical geography, US foreign relations/policy, war and peace studies, and cultural studies.

Heather Ashley Hayes is an Assistant Professor of Rhetoric at Whitman College, USA. Her research traverses the intersections of rhetoric, race, violence, and the global terror wars. She has published work with academic journals such as Quarterly Journal of Speech and Argumentation and Advocacy and her work has been featured in a number of book publications.

“Heather Hayes has produced a careful, well-reasoned, and thoughtful analysis of what she terms "rhetoricoviolence," the multi-layered ways in which rhetoric and violence can be understood as traveling together. Deeply embedded in the materialist turn, Hayes' analysis also relies on theories of rhetorical cartography to provide a cogent analysis of the war of terror. In so doing, she deepens our understanding of rhetorical theory and method, contributes to our knowledge of the ways in which violence and war are deeply rhetorical, and adds to the scholarly conversation on empire and colonialization. Scholars of politics, rhetoric, and history will find much of value in this work.” (Mary E. Stuckey, Professor of Communication & Political Science, Georgia State University, USA)

“Heather Hayes has developed an innovative approach to interrogating the global terror wars by theorizing violence as a rhetorical form and using case studies to map the circulation of what she calls “rhetoricoviolence.” She examines how violence produces, articulates, and reconfigures subjectivities and rhetorical situations (with rhetorical situations redefined to consist of assemblages of people, spaces, and technologies). Focusing on the violence of the US drone program, Hayes’s critical rhetorical cartography documents the use of this kind of power to colonize the Arab world into “good Muslims.” Her project invites and opens a way for further cartographies aimed at a better understanding and productive critique of transnational empire.” (Robert L. Ivie, Professor Emeritus, Indiana University, USA)

“Claiming that the remaking of the world during “the terror wars” has been a fundamentally rhetorical project, this book offers a new and provocative thesis on the rhetoric of violence. There is no such thing as “mere rhetoric,” Professor Hayes argues. Rhetoric is all, and so rhetorical scholars have a lot of work to do.” (Jeremy Engels, Associate Professor, The Pennsylvania State University, USA)