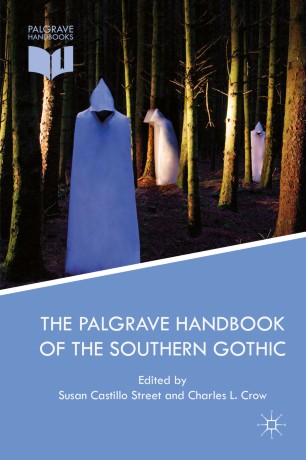 The Palgrave Handbook of the Southern Gothic

This book examines ‘Southern Gothic’ - a term that describes some of the finest works of the American Imagination. But what do ‘Southern’ and ‘Gothic’ mean, and how are they related? Traditionally seen as drawing on the tragedy of slavery and loss, ‘Southern Gothic’ is now a richer, more complex subject. Thirty-five distinguished scholars explore the Southern Gothic, under the categories of Poe and his Legacy; Space and Place; Race; Gender and Sexuality; and Monsters and Voodoo.
The essays examine slavery and the laws that supported it, and stories of slaves who rebelled and those who escaped. Also present are the often-neglected issues of the Native American presence in the South, socioeconomic class, the distinctions among the several regions of the South, same-sex relationships, and norms of gendered behaviour. This handbook covers not only iconic figures of Southern literature but also other less well-known writers, and examines gothic imagery in film and in contemporary television programmes such as True Blood and True Detective.