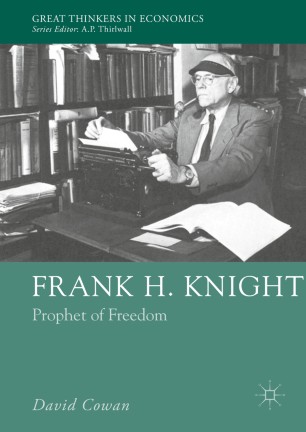 Frank H. Knight was co-founder of the “Chicago School”. He was, first and foremost, a teacher; a theorist and author second. His work is scattered across many economic journals in essay-form standing on the base of Risk, Uncertainty and Profit, published in 1921.

Within the economic world today he is chiefly noted for the notion of ‘Knightian Uncertainty’, with which he established his reputation in the pantheon of great economic thinkers. While many who passed through his classes and the Chicago School placed great faith in capitalism, Knight remained a critical supporter of capitalism, offering prophetic insights into behavioural economics and economic society.

The 2008 recession burst the bubble of optimism, dating back to the 1980s, in what the economy can do for society. This brought back Keynesian insights into thinking about policy today. In this book, the author argues that Knight also deserves reconsideration, as his prophetic insights can offer a view into the soul of the modern economy.