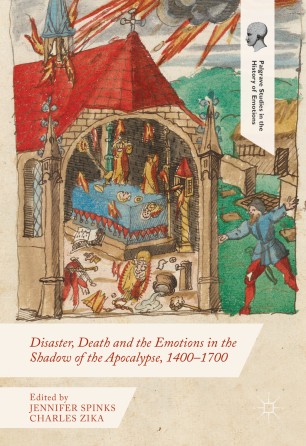 Disaster, Death and the Emotions in the Shadow of the Apocalypse, 1400–1700

In late medieval and early modern Europe, textual and visual records of disaster and mass death allow us to encounter the intense emotions generated through the religious, providential and apocalyptic frameworks that provided these events with meaning. This collection brings together historians, art historians, and literary specialists in a cross-disciplinary collection shaped by new developments in the history of emotions. It offers a rich range of analytical frameworks and case studies, from the emotional language of divine providence to individual and communal experiences of disaster. Geographically wide-ranging, the collection also analyses many different sorts of media: from letters and diaries to broadsheets and paintings. Through these and other historical records, the contributors examine how communities and individuals experienced, responded to, recorded and managed the emotional dynamics and trauma created by dramatic events like massacres, floods, fires, earthquakes and plagues.

Jennifer Spinks is Senior Lecturer in Early Modern History at the University of Manchester, UK. Her research projects often concern print culture and religious identities in northern Europe, and include the co-curated exhibition projectMagic, Witches and Devils in the Early Modern World. Her publications includeMonstrous Births and Visual Culture in Sixteenth-Century Germany (2009).

Charles Zika is Professorial Fellow in History at the University of Melbourne, Australia, and Chief Investigator, ARC Centre of Excellence for the History of Emotions. His research lies in the intersection of religion, emotion, visual culture and print, and recent publications include The Appearance of Witchcraft: Print and Visual Culture in Sixteenth-Century Europe (2007), and two co-edited catalogues.