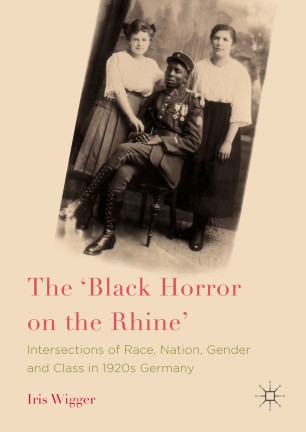 The 'Black Horror on the Rhine'

Intersections of Race, Nation, Gender and Class in 1920s Germany

This book explores the 'Black Horror' campaign as an important chapter in the popularisation of racialised discourse in European history. Originating in early 1920s Germany, this international racist campaign was promoted through modern media, targeting French occupation troops from colonial Africa on German soil and using stereotypical images of 'racially primitive', sexually depraved black soldiers threatening and raping 'white women' in 1920s Germany to generate widespread public concern about their presence. The campaign became an international phenomenon in Post-WWI Europe, and had followers throughout Europe, the US and Australia. Wigger examines the campaign's combination of race, gender, nation and class as categories of social inclusion and exclusion, which led to the formation of a racist conglomerate of interlinked discriminations. Her book offers readers a rare insight into a widely forgotten chapter of popular racism in Europe, and sets out the benefits of a historically reflexive study of racialised discourse and its intersectionality.