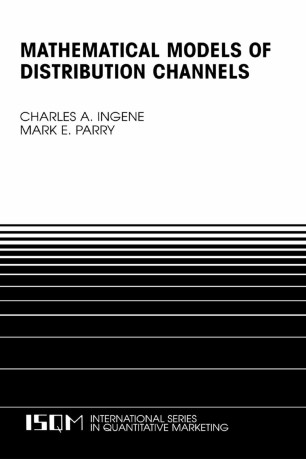 Mathematical Models of Distribution Channels identifies eight "Channel Myths" that characterize almost all analytical research on distribution channels. The authors prove that models that incorporate one or more Channel Myths generate distorted conclusions; they also develop a methodology that will enable researchers to avoid falling under the influence of any Channel Myth.

At the heart of their analysis is a single-manufacturer/multiple-retailer meta-model that embraces any degree of inter-retailer competition and any distribution of market shares. In Chapters 1 and 2 the authors provide an introduction to the current, analytical literature on distribution channels, and they present an intuitively appealing prologue to the Channel Myths that are developed rigorously in later Chapters. In Chapters 3, 4, and 10 they extend the literature by ascertaining the relationship between the manufacturer-optimal wholesale-price strategy and channel breadth. Specific analyses include multiple, non-competing retailers, multiple states-of-nature, and multiple, competing retailers. In Chapters 5-7 the authors determine the profitability of various wholesale-price strategies; this analysis culminates in Chapters 8 and 9 with the determination of the (very limited) conditions under which channel coordination can be optimal for the manufacturer. In Chapter 11 they prove that existing methods of measuring the effect of a change in the degree of inter-retailer substitutability are totally misleading. They then develop an original, theoretical basis for measuring the impact of a change in the degree of inter-retailer substitutability that yields insightful, intuitively appealing results. In Chapter 12 the authors set forth an agenda for future research based on a meta-model that embraces all existing models in the literature. They also issue an appeal for creation of a "Unifying Theory of Distribution Channels" that will enable researchers to work independently and yet to contribute toward the common goal of deepening the marketing science professions’ understanding of distribution channels.