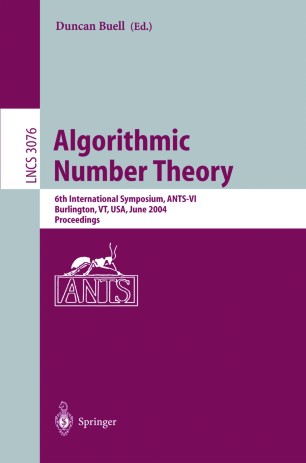 The sixth Algorithmic Number Theory Symposium was held at the University of Vermont, in Burlington, from 13–18 June 2004. The organization was a joint e?ort of number theorists from around the world. There were four invited talks at ANTS VI, by Dan Bernstein of the Univ- sity of Illinois at Chicago, Kiran Kedlaya of MIT, Alice Silverberg of Ohio State University, and Mark Watkins of Pennsylvania State University. Thirty cont- buted talks were presented, and a poster session was held. This volume contains the written versions of the contributed talks and three of the four invited talks. (Not included is the talk by Dan Bernstein.) ANTS in Burlington is the sixth in a series that began with ANTS I in 1994 at Cornell University, Ithaca, New York, USA and continued at Universit´eB- deaux I, Bordeaux, France (1996), Reed College, Portland, Oregon, USA (1998), the University of Leiden, Leiden, The Netherlands (2000), and the University of Sydney, Sydney, Australia (2002). The proceedings have been published as volumes 877, 1122, 1423, 1838, and 2369 of Springer-Verlag’s Lecture Notes in Computer Science series. The organizers of the 2004 ANTS conference express their special gratitude and thanks to John Cannon and Joe Buhler for invaluable behind-the-scenes advice.