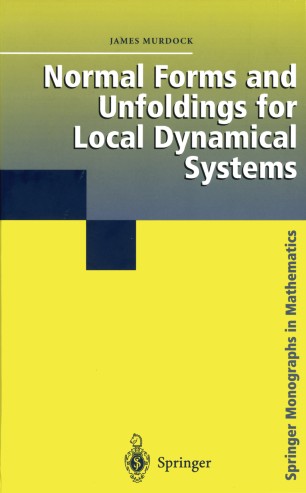 The subject of local dynamical systems is concerned with the following two questions: 1. Given an n×n matrix A, describe the behavior, in a neighborhood of the origin, of the solutions of all systems of di?erential equations having a rest point at the origin with linear part Ax, that is, all systems of the form x ? = Ax+··· , n where x? R and the dots denote terms of quadratic and higher order. 2. Describethebehavior(neartheorigin)ofallsystemsclosetoasystem of the type just described. To answer these questions, the following steps are employed: 1. A normal form is obtained for the general system with linear part Ax. The normal form is intended to be the simplest form into which any system of the intended type can be transformed by changing the coordinates in a prescribed manner. 2. An unfolding of the normal form is obtained. This is intended to be the simplest form into which all systems close to the original s- tem can be transformed. It will contain parameters, called unfolding parameters, that are not present in the normal form found in step 1. vi Preface 3. The normal form, or its unfolding, is truncated at some degree k, and the behavior of the truncated system is studied.

"In the analysis of local dynamical systems … normal form theory plays an essential role. … this is a serious introduction to methods that have been developed in the last few decades. … This is a book that can be enjoyed on many levels, which is bound to give the reader new insights into the theory of normal forms and its applications." (Jan A. Sanders, Mathematical Reviews, Issue 2003 k)

"The book … aims to introduce both the algebraic structure of the coordinate transformations that are used in the normalization and … the geometric structure of the vector fields that are thus obtained. … The discussion … is the most lucid I have found to date. … The reader who expects to learn the basic ideas and techniques of normal form theory will find this book rewarding. Its algebraic approach is well suited to readers interested in automated computations of normal forms." (Kresimir Josic, Siam Review, Vol. 46 (4), 2004)

"Normal-form theory has become a celebrated topic which is widely used in nonlinear science. … This book certainly represents a very thorough treatment of the anatomy of normal-form transformations … . It may serve well as a reference work … and indeed the author achieves his stated aim of providing an encyclopedia of results and explanations which are not easily found in the existing literature." (Mark Groves, UK Nonlinear News, Issue 35, February, 2004)

"The theory of local dynamical systems studies neighbourhoods of a given equilibrium point, in particular the dynamical behaviour that is generically possible. … To my knowledge the monograph under review is the first successful attempt to deal with the ‘Elphick-Iooss’ inner product style and the ‘Cushman-Sanders’ sl(2) style at a larger scale. … the text successfully addresses computer-algebraic aspects of certain normal form computations that are useful for applications in concrete examples." (Henk Broer, Siam, November, 2003)

"This book is a treatise on normal forms and unfoldings of a dynamical system near a singular point. The goal is to lay down basic principles and this is … the main originality of this work. Moreover it is selfcontained. … The volume contains new results including some of the author. … This conceptually attractive and clearly written book is recommended." (A. Akutowicz, Zentralblatt MATH, Vol. 1014, 2003)