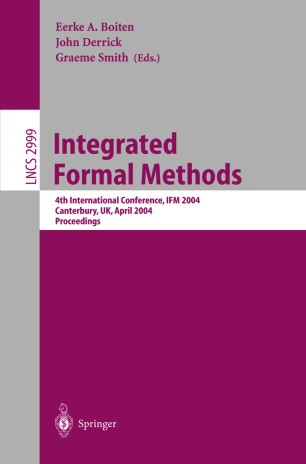 The fourth conference in the series of international meetings on Integrated F- mal Methods, IFM, was held in Canterbury, UK, 4–7 April 2004. The conference was organized by the Computing Laboratory at the University of Kent, whose main campus is just outside the ancient town of Canterbury, part of the county of Kent. Kent is situated in the southeast of England, and the university sits on a hill overlooking the city of Canterbury and its world-renowned cathedral. The UniversityofKentwasgranteditsRoyalCharterin1965.Todaytherearealmost 10,000 full-time and part-time students, with over 110 nationalities represented. The IFM meetings have proven to be particularly successful. The ?rst m- ting was held in York in 1999, and subsequently we held events in Germany in 2000, and then Finland in 2002. The conferences are held every 18 months or so, and attract a wide range of participants from Europe, the Americas, Asia and Australia. The conference is now ?rmly part of the formal methods conference calendar. The conference has also evolved in terms of themes and subjects - presented, and this year, in line with the subject as a whole, we saw more work on veri?cation as some of the challenges in this subject are being met. The work reported at IFM conferences can be seen as part of the attempt to manage complexity by combining paradigms of speci?cation and design, so that the most appropriate design tools are used at di?erent points in the life-cycle.