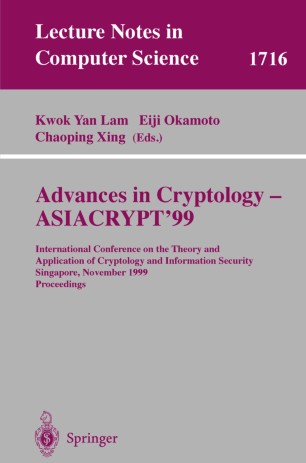 International Conference on the Theory and Application of Cryptology and Information Security, Singapore, November 14-18, 1999. Proceedings

Asiacrypt’99 was held in Singapore on 14-18 November 1999. Asiacrypt is one of the major events in the cryptology research community. Asiacrypt’99, the ?fth annual Asiacrypt conference, was sponsored by the Asiacrypt Steering Comm- tee and the Centre for Systems Security of the National University of Singapore, and in cooperation with the International Association for Cryptology Research. As the Program Co-Chairs of Asiacrypt’99, we are extremely honored to or- nize this event, which showcases the state-of-the-art development of cryptology research at the conclusion of this millennium. This year, a total of 96 research papers were submitted to Asiacrypt’99. The portfolio of country of origin of submissions serves as a good indicator of the - ternational reputation of the conference. Countries from which submissions or- inated include: Australia, Belgium, China, Estonia, France, Germany, Greece, India, Iran, Japan, Korea, Norway, Russia, Saudi Arabia, Switzerland, Sin- pore, Spain, Taiwan, Thailand, The Netherlands, Turkey, Ukraine, UK, USA and Yugoslavia. Through a stringent refereeing process by the Program C- mittee, 31 papers of outstanding quality were accepted and are included in the conference proceedings. Accepted papers were authored by researchers from the following countries: Australia, Belgium, France, Germany, India, Japan, China, Singapore, Switzerland, Taiwan, The Netherlands, UK, and USA.