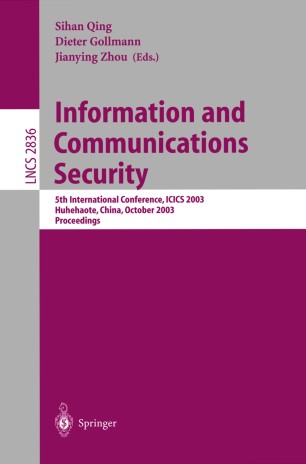 ICICS 2003, the Fifth International Conference on Information and C- munication Security, was held in Huhehaote city, Inner Mongolia, China, 10–13 October 2003. Among the preceding conferences, ICICS’97 was held in B- jing, China, ICICS’99 in Sydney, Australia, ICICS 2001 in Xi’an, China, and ICICS 2002,in Singapore.TheproceedingswerereleasedasVolumes1334,1726, 2229, and 2513 of the LNCS series of Springer-Verlag, respectively. ICICS 2003 was sponsored by the Chinese Academy of Sciences (CAS), the National Natural Science Foundation of China, and the China Computer F- eration. The conference was organized by the Engineering Research Center for Information Security Technology of the Chinese Academy of Sciences (ERCIST, CAS) in co-operation with the International Communications and Information Security Association (ICISA). The aim of the ICICS conferences has been to o?er the attendees the - portunity to discuss the state-of-the-art technology in theoretical and practical aspects of information and communications security. The response to the Call forPaperswassurprising.WhenwewerepreparingtheconferencebetweenApril and May, China, including the conference venue, Huhehaote City, was ?ghting against SARS. Despite this 176 papers were submitted to the conference from 22 countries and regions, and after a competitive selection process, 37 papers from 14 countries and regions were accepted to appear in the proceedings and be presented at ICICS 2003. We would like to take this opportunity to thank all those who submitted papers to ICICS 2003 for their valued contribution to the conference.