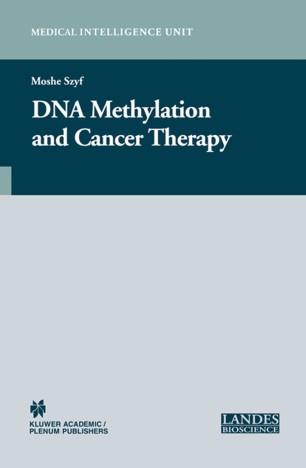 NA methylation has bewildered molecular biologists since Hotchkiss discovered it almost six decades ago (Hotchkiss RDJ. Biol Cem 1948; 175:315-332). The fact that the chemical structure of our D genome consists of two components that are covalently bound, the genetic information that is replicated by the DNA replication machinery ana DNA methylation that is maintainea by independent enzymatic machinery, has redictably stimulated the imagination and curiosity of generations of mo­ Edular biologists. An obvious question was whether DNA methylation was a bearer of additional information to the genetic information and what was the nature of this information? It was tempting to speculate that DNA me­ thylation applied some form of control over programming of the genome s expression profile. Once techniques to probe the methylation profile of whole genomes as well as specific genes became available, it became clear that DNA methylation patterns are gene and tissue specific and that patterns of gene expression correlate with patterns of methylation. DNA methylation pat­ terns emerged as the only component of the chemical structure of DNA that exhibited tissue and cell specificity. This data seemingly provided an attrac­ tively simple explanation for the longstanding dilemma of how could one identical genome manifest itself in so many different forms in multicellular organisms? The DNA methylation pattern has thus become the only known factor to confer upon DNA a unique cellular identity.