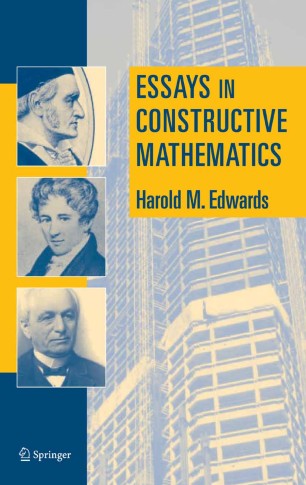 "... The exposition is not only clear, it is friendly, philosophical, and considerate even to the most naive or inexperienced reader. And it proves that the philosophical orientation of an author really can make a big difference. The mathematical content is intensely classical. ... Edwards makes it warmly accessible to any interested reader. And he is breaking fresh ground, in his rigorously constructive or constructivist presentation. So the book will interest anyone trying to learn these major, central topics in classical algebra and algebraic number theory. Also, anyone interested in constructivism, for or against. And even anyone who can be intrigued and drawn in by a masterly exposition of beautiful mathematics." Reuben Hersh

This book aims to promote constructive mathematics, not by defining it or formalizing it, but by practicing it, by basing all definitions and proofs on finite algorithms. The topics covered derive from classic works of nineteenth century mathematics---among them Galois' theory of algebraic equations, Gauss's theory of binary quadratic forms and Abel's theorem about integrals of rational differentials on algebraic curves. It is not surprising that the first two topics can be treated constructively---although the constructive treatments shed a surprising amount of light on them---but the last topic, involving integrals and differentials as it does, might seem to call for infinite processes. In this case too, however, finite algorithms suffice to define the genus of an algebraic curve, to prove that birationally equivalent curves have the same genus, and to prove the Riemann-Roch theorem. The main algorithm in this case is Newton's polygon, which is given a full treatment. Other topics covered include the fundamental theorem of algebra, the factorization of polynomials over an algebraic number field, and the spectral theorem for symmetric matrices.

Harold M. Edwards is Emeritus Professor of Mathematics at New York University. His previous books are Advanced Calculus (1969, 1980, 1993), Riemann's Zeta Function (1974, 2001), Fermat's Last Theorem (1977), Galois Theory (1984), Divisor Theory (1990) and Linear Algebra (1995). Readers of his Advanced Calculus will know that his preference for constructive mathematics is not new. In 1980 he was awarded the Steele Prize for mathematical exposition for the Riemann and Fermat books.

"Harold Edwards is well known for his books with a constructivist slant, and his latest book aims to spread his message further. … The major part of the book consists of essays … telling a connected story, showing what can be achieved with such a constructive restriction imposed. The achievement is impressive … . " (John Baylis, The Mathematical Gazette, Vol. 90 (5l9), 2006)

"The author of this volume points out immediately that it is not about the history or philosophy of mathematics, but rather a book about mathematics. It soon becomes clear, though, that historical and philosophical issues strongly influenced the topics discussed. … The general point of view is that all definitions, theorems, constructs, and proofs should involve only algorithms that terminate in a finite number of steps. … The book contains a wealth of interesting mathematics well worth reading." (Larry C. Grove, SIAM Review, Vol. 47 (4), 2005)

“The book under review presents several important topics in mathematics from a constructivist point of view. … This book is a delight to read. … Moreover, the required background is kept to a minimum, so the book can be read by anyone with a good understanding of basic algebra. … The style of the book itself is sufficient reason for reading it. … One would wish that more mathematicians read the masters in search of inspiration, instead of merely following the most recent fads.” (S. C. Coutinho, SIGACT News, Vol. 41 (2), 2010)
Buy options