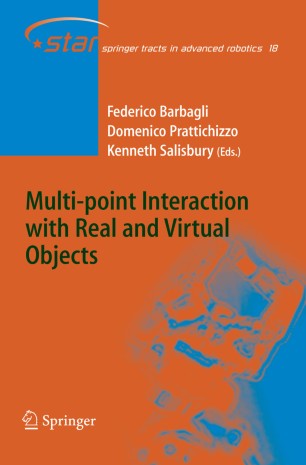 The problem of robotic and virtual interaction with physical objects has been the subject of research for many years in both the robotic manipulation and haptics communities. Both communities have focused much attention on human touch-based perception and manipulation, modelling contact between real or virtual hands and objects, or mechanism design. However, as a whole, these problems have not yet been addressed from a unified perspective. This edited book is the outcome of a well-attended workshop which brought together leading scholars from various branches of the robotics, virtual-reality, and human studies communities during the 2004 IEEE International Conference on Robotics and Automation. It covers some of the most challenging problems on the forefront of today’s research on physical interaction with real and virtual objects, with special emphasis on modelling contacts between objects, grasp planning algorithms, haptic perception, and advanced design of hands, devices and interfaces.