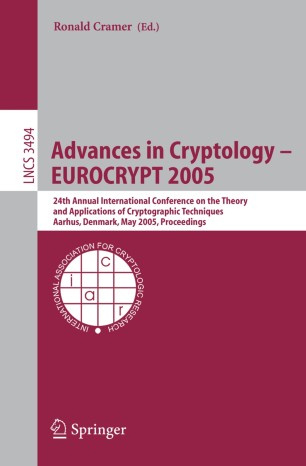 24th Annual International Conference on the Theory and Applications of Cryptographic Techniques, Aarhus, Denmark, May 22-26, 2005. Proceedings

These are the proceedings of the 24th Annual IACR Eurocrypt Conference. The conference was sponsored by the International Association for Cryptologic Research(IACR;seewww.iacr.org),thisyearincooperationwiththeComputer Science Department of the University of Aarhus, Denmark. As General Chair, Ivan Damg? ard was responsible for local organization. TheEurocrypt2005ProgramCommittee(PC)consistedof30internationally renowned experts. Their names and a?liations are listed on pages VII and VIII of these proceedings. By the November 15, 2004 submission deadline the PC had received a total of 190 submissions via the IACR Electronic Submission Server. The subsequent selection process was divided into two phases, as usual. In the review phase each submission was carefully scrutinized by at least three independent reviewers, and the review reports, often extensive, were committed to the IACR Web Review System. These were taken as the starting point for the PC-wideWeb-baseddiscussionphase.Duringthisphase,additionalreportswere provided as needed, and the PC eventually had some 700 reports at its disposal. In addition, the discussions generated more than 850 messages, all posted in the system. During the entire PC phase, which started in August 2003 with my earliest invitations to PC members and which continued until March 2005, more than 1000 email messages were communicated. Moreover, the PC received much appreciated assistance from a large body of external reviewers. Their names are listed on page VIII of these proceedings.