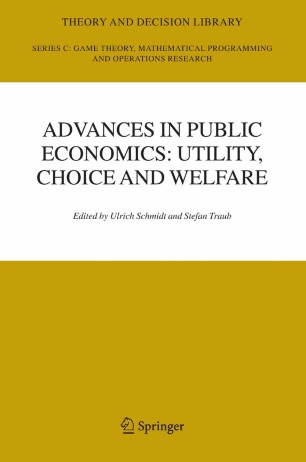 A Festschrift for Christian Seidl

This Festschrift in honor ofChristian Seidl combines a group of prominent authors who are experts in areas like public economics, welfare economic, decision theory, and experimental economics in a unique volume. Christian Seidl who has edited together with Salvador Barber` a ` and Peter Hammond the Handbook of Utility Theory (appearing at Kluwer Academic Publishers/Springer Economics), has dedicated most of his research to utility and decision theory, social choice theory, welfare economics, and public economics. During the last decade, he has turned part of his attention to a research tool that is increasingly gaining in importance in economics: the laboratory experiment. This volume is an attempt to illuminate all facets of Christian Seidl’s ambitious research agenda by presenting a collection of both theoretical and expe- mental papers on Utility,Choice,andWelfare written by his closest friends, former students, and much valued colleagues. Christian Seidl was born on August 5, 1940, in Vienna, Austria. Beginning Winter term 1962/63, he studied Economics and Business Administration at the Vienna School of Economics (then “Hochschule fff¨ ur ¨ Welthandel”). 1966 he was awarded an MBA by the Vienna School of Economics and 1969 a doctoral degree in Economics. In October 1968 Christian became a research assistant at the Institute of Economics at the University of Vienna. 1973 he acquired his habilitation (right to teach) in Economics — supervised by Wilhelm Weber — from the Department of Law and Economics of the University of Vienna. He was awarded the Dr.