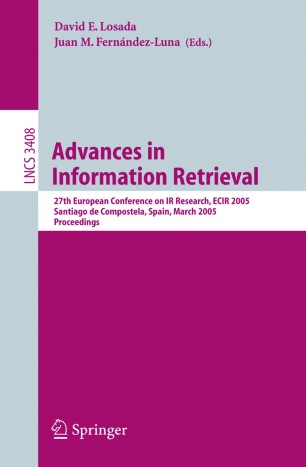 Welcome to Santiago de Compostela! We are pleased to host the 27th Annual EuropeanConferenceonInformationRetrievalResearch(ECIR2005)onits?rst visit to Spain. These proceedings contain the refereed full papers and poster abstracts p- sented at ECIR 2005. This conference was initially established by the Infor- tion Retrieval Specialist Group of the British Computer Society (BCS-IRSG) under the name “Annual Colloquium on Information Retrieval Research. ” The colloquium was held in the United Kingdom each year until 1998, when the event was organized in Grenoble, France. Since then the conference venue has alternated between the United Kingdom and Continental Europe, re?ecting the growing European orientation of ECIR. For the same reason, in 2001 the event was renamed “European Conference on Information Retrieval Research. ” In - cent years, ECIR has continued to grow and has become the major European forum for the discussion of research in the ?eld of information retrieval. ECIR 2005 was held at the Technical School of Engineering of the University of Santiago de Compostela, Spain. In terms of submissions, ECIR 2005 was a record-breaking success, since 124 full papers were submitted in response to the call for papers. This was a sharp increase from the 101 submissions received for ECIR 2003, which was the most successful ECIR in terms of submissions. ECIR 2005 established also a call for posters, and 41 posters where submitted. Paper and poster submissions were received from across Europe and further a?eld, including North America, South America, Asia and Australia, which is a clear indicationofthegrowingpopularityandreputationoftheconference.