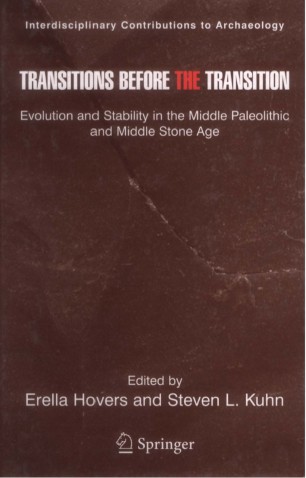 Transitions Before the Transition

Evolution and Stability in the Middle Paleolithic and Middle Stone Age

Part of the Interdisciplinary Contributions To Archaeology book series (IDCA)

Modern human origins and the fate of the Neanderthals are arguably the most compelling and contentious arenas in paleoanthropology. The much-discussed split between advocates of a single, early emergence of anatomically modern humans in sub-Saharan Africa and supporters of various regional continuity positions is only part of the picture. Equally if not more important are questions surrounding the origins of modern behavior, and the relationships between anatomical and behavioral changes that occurred during the past 200,000 years. Although modern humans as a species may be defined in terms of their skeletal anatomy, it is their behavior, and the social and cognitive structures that support that behavior, which most clearly distinguish Homo sapiens from earlier forms of humans.

This book assembles researchers working in Eurasia and Africa to discuss the archaeological record of the Middle Paleolithic and the Middle Stone Age. This is a time period when Homo sapiens last shared the world with other species, and during which patterns of behavior characteristic of modern humans developed and coalesced. Contributions to this volume query and challenge some current notions about the tempo and mode of cultural evolution, and about the processes that underlie the emergence of modern behavior. The papers focus on several fundamental questions. Do typical elements of "modern human behavior" appear suddenly, or are there earlier archaeological precursors of them? Are the archaeological records of the Middle Paleolithic and Middle Stone Age unchanging and monotonous, or are there detectable evolutionary trends within these periods? Coming to diverse conclusions, the papers in this volume open up new avenues to thinking about this crucial interval in human evolutionary history.

This title explores questions surrounding the origins of modern behavior, and the relationships between anatomical and behavioral changes that occurred during the past 200,000 years. It assembles researchers working in Eurasia and Africa to discuss what was happening during the Middle Paleolithic and Middle Stone Age (the "Transition"); i.e. the era prior to or during the appearance of anatomically modern humans in their geographic areas.