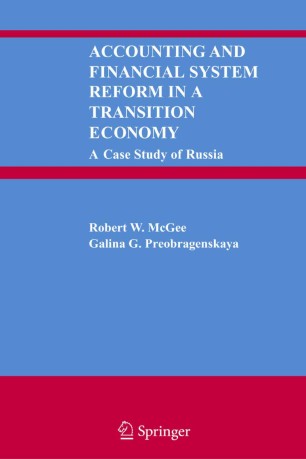 Accounting and Financial System Reform in a Transition Economy: A Case Study of Russia

Using Russia as a case study the authors examined all the major aspects of accounting reform, starting with problems of implementation. They also examined the current state of auditing in Russia. Other studies looked at the changes in accounting education that are sweeping through Russian universities and the private sector and how international accounting certification is being used to meet the demand for credible accounting practitioners. They also devote chapters to corporate governance issues, the Russian tax system and the problems Russian enterprises face when they try to attract foreign direct investment.

Robert W. McGee is a professor at the Florida International University, USA. He has doctorates in accounting, economics, law and philosophy. He is an attorney, certified public accountant, certified management accountant and economist and has worked on the USAID Accounting Reform projects in Russia, Armenia and Bosnia & Herzegovina and was a nonresident advisor for the USAID Accounting Reform projects in Georgia and Kazakhstan. He has published more than 40 books and more than 300 scholarly articles in the fields of accounting, taxation, economics, law and philosophy. He is co-author of Accounting and Financial System Reform in a Transition Economy: A Case Study of Russia, which is forthcoming from Springer Science. One of his other recent books is The Philosophy of Taxation and Public Finance, published by Kluwer Academic Publishers.