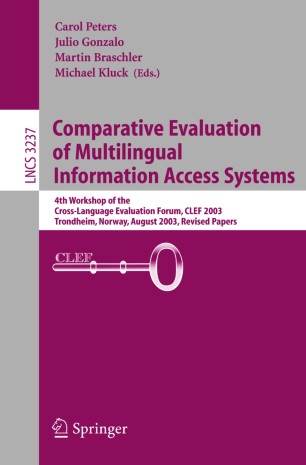 The fourth campaign of the Cross-language Evaluation Forum (CLEF) for European languages was held from January to August 2003. Participation in this campaign showed a slight rise in the number of participants from the previous year, with 42 groups submitting results for one or more of the different tracks (compared with 37 in 2002), but a steep rise in the number of experiments attempted. A distinctive feature of CLEF 2003 was the number of new tracks and tasks that were offered as pilot experiments. The aim was to try out new ideas and to encourage the development of new evaluation methodologies, suited to the emerging requirements of both system developers and users with respect to today’s digital collections and to encourage work on many European languages rather than just those most widely used. CLEF is thus gradually pushing its participants towards the ultimate goal: the development of truly multilingual systems capable of processing collections in diverse media. The campaign culminated in a two-day workshop held in Trondheim, Norway, 21–22 August, immediately following the 7th European Conference on Digital Libraries (ECDL 2003), and attended by more than 70 researchers and system developers. The objective of the workshop was to bring together the groups that had participated in the CLEF 2003 campaign so that they could report on the results of their experiments.