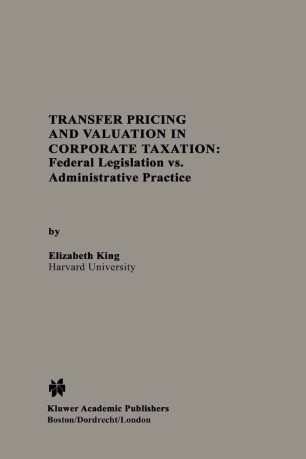 Transfer Pricing and Valuation in Corporate Taxation analyzes the disparities between both federal statutes and regulations, and r- ulations and administrative practice, in a highly controversial area of corporate tax policy: intra-company transfer pricing for tax p- poses. It addresses issues that often mean millions of dollars to in- vidual corporations, and a significant fraction of the federal gove- ment’s revenue base. These disparities between law, regulations, and administrative practice are concerning on a number of grounds. First, they - pose considerable economic costs by inducing corporations to engage in a variety of “rent-seeking” activities designed to reduce their - pected tax liabilities, and by requiring the IRS to devote still more to enforcement efforts that are very often futile. Second, they are in- ; herently undemocratic. Administrative practice is currently ad hoc by relying on dispute resolution procedures that can and do yield very different settlements on disputed tax issues from one case to another, the IRS often ends up treating similarly situated cor- rations very differently. Moreover, to the extent that the disp- ity between statute and implementation reflects the IRS’s failure to carry out Congress’ will, the laws passed by duly elected officials are effectively being superseded by administrative procedure, developed incrementally by individuals who are not answerable to an electorate.