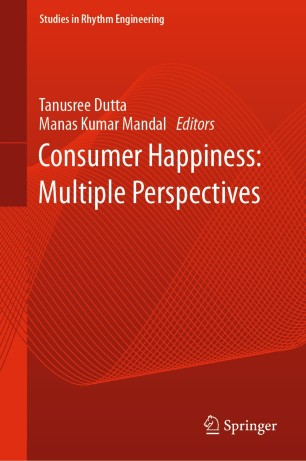 Part of the Studies in Rhythm Engineering book series (SRE)

This book helps quench the quest of knowledge of academicians, researchers, and others interested in developing a complete and critical understanding of consumer happiness. The relentless search of happiness by humans is sought in different ways. Scientific discussion on happiness for long was considered a forte of Philosophers. Other disciplines seldom delved into this. But today not only science but neuroscience, marketing, and other varied fields have started delving into it and have developed a keen interest. The book has been conceptualized on this line of thinking and thus divided into two parts. The first part is customized towards understanding various perspectives of happiness and the relative importance of knowing the same. The first chapter of this section is on the biological perspective of happiness. The second is titled ‘Behavioural perspective’. The third chapter is an attempt to elucidate the cultural perspective of the concept of happiness. The fourth is on the role of technology in inducing happiness. Fifth and sixth are on theories of happiness and measuring happiness, respectively. Knowledge about the different perspective and theories has a wide range of benefits. It informs us about how the brain works, interprets, and reacts. This theoretical understanding helps us to move beyond the trial and error methods towards a more scientific underpinning of adoption of measures that would generate long-lasting happiness in consumers.

The second part of the book is dedicated toward understanding consumer happiness from a neuroscience perspective;, i.e. keeping consumer happy. This segment has ten chapters. The first is on differentiating the concept of happiness from satisfaction. The second is on sensory marketing and happiness. The third deals with the store design and shelving of products to generate happiness. Fourth and fifth chapters relate to persuading the consumers. While the fourth chapter is on developing persuasive messages and the fifth is on subliminal messaging sixth chapter is on pricing and seventh on advertising. The eighth chapter highlights the role of emotions and the ninth is on the different factors that induce happiness in consumers. The last chapter is about raising some unanswered questions and food for thought for readers. Together the contents of the book make for a complete understanding of the concept of happiness and how it is shaping the world of marketing. Addressing the ‘what’ and ‘how’ of consumer happiness in the same book makes the book comprehensive.

Dr. Tanusree Dutta is presently working as Assistant Professor, in Indian Institute of Management, Ranchi. She was associated with Rekhi Centre of Excellence for the Science of Happiness, Indian Institute of Technology, Kharagpur (on lien from Indian Institute of Management Ranchi) She has research publications in peer-reviewed national and international journals which have been cited in manuscripts and books of national and international repute. She has co-authored a book titled ‘Neuromarketing in India: Understanding the Indian Consumer’ and has co-edited a book titled ‘Bias in Human Behavior’.

Dr. Manas K Mandal is currently serving as Distinguished Visiting Professor at Indian Institute of Technology - Kharagpur. He is also Adjunct Professor at the National Institute of Advanced Studies, IISC, Bangalore. He was formerly Distinguished Scientist and Director-General – Life Sciences in DRDO2013–2016]. Prior to this, he was Chief Controller R&D (Life Sciences), DRDO. He was also Director, Defense Institute of Psychological Research, for about nine years. During 2003, he was Fulbright Visiting Lecturer at Harvard University, USA.