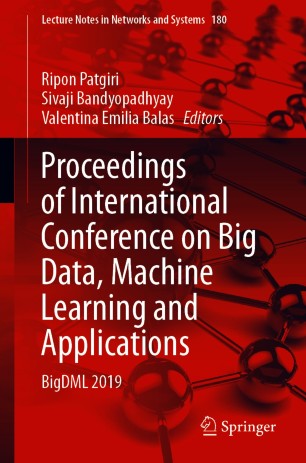 Part of the Lecture Notes in Networks and Systems book series (LNNS, volume 180)

This book covers selected high-quality research papers presented at the International Conference on Big Data, Machine Learning, and Applications (BigDML 2019). It focuses on both theory and applications in the broad areas of big data and machine learning. It brings together the academia, researchers, developers and practitioners from scientific organizations and industry to share and disseminate recent research findings.

Dr. Ripon Patgiri is Assistant Professor at the Department of Computer Science & Engineering, National Institute of Technology Silchar. He has received his Ph.D. degree from National Institute of Technology Silchar. He has seven years of teaching and research experiences. Moreover, he has rich experiences in organizing conferences. He has published several journal articles, conference papers and book chapters. Also, he is editing several books. He is a senior member of IEEE.

Prof. Sivaji Bandyopadhay is Director of National Institute of Technology Silchar since December 2017. He is Professor of the Department of Computer Science & Engineering, Jadavpur University, India, where he has been serving since 1989. He is attached as Professor, Computer Science and Engineering Department, National Institute of Technology Silchar. He has more than 300 publications in reputed journals and conferences. He has edited two books so far. His research interests are in the area of natural language processing, machine translation, sentiment analysis and medical imaging among others. He has organized several conferences and has been the Program Committee member and Area Chair in several reputed conferences. He has completed international funded projects with France, Japan and Mexico. At the national level, he has been Principal Investigator of several consortium mode projects in the areas of machine translation, cross-lingual information access and treebank development. At present, he is Principal Investigator of an Indo-German SPARC project with the University of Saarlandes, Germany, on Multimodal Machine Translation and the Co-PI of several other international projects.

Prof. Valentina E. Balas is currently Full Professor in the Department of Automatics and Applied Software at the Faculty of Engineering, “Aurel Vlaicu” University of Arad, Romania. She holds a Ph.D. in Applied Electronics and Telecommunications from Polytechnic University of Timisoara. Dr. Balas is the author of more than 300 research papers in refereed journals and international conferences. Her research interests are in intelligent systems, fuzzy control, soft computing, smart sensors, information fusion, modeling and simulation. She is Editor-in-Chief to International Journal of Advanced Intelligence Paradigms (IJAIP) and to International Journal of Computational Systems Engineering (IJCSysE), an Editorial Board member of several national and international journals and is an evaluator expert for national, international projects and Ph.D. Thesis. Dr. Balas is Director of Intelligent Systems Research Centre in Aurel Vlaicu University of Arad and Director of the Department of International Relations, Programs and Projects in the same university. She served as General Chair of the International Workshop Soft Computing and Applications (SOFA) in eight editions 2005–2020 held in Romania and Hungary. Dr. Balas participated in many international conferences as Organizer, Honorary Chair, Session Chair and a member in Steering, Advisory or International Program Committees. She is a member of EUSFLAT, SIAM, a senior member of IEEE, a member in TC – Fuzzy Systems (IEEE CIS), Chair of the TF 14 in TC – Emergent Technologies (IEEE CIS), and a member in TC – Soft Computing (IEEE SMCS). Dr. Balas was past Vice-President (Awards) of IFSA International Fuzzy Systems Association Council (2013–2015) and is Joint Secretary of the Governing Council of Forum for Interdisciplinary Mathematics (FIM), A Multidisciplinary Academic Body, India.