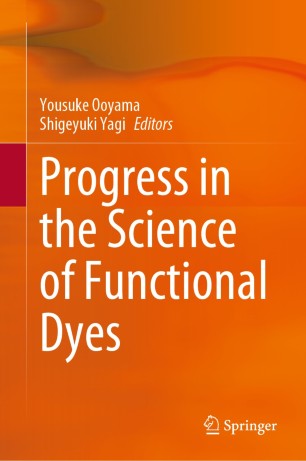 Progress in the Science of Functional Dyes

This book covers a wide range of topics related to functional dyes, from synthesis and functionality to application. Making a survey of recent progress in functional dye chemistry, it provides an opportunity not only to understand the structure-property relationships of a variety of functional dyes but also to know how they are applied in practical use, from electronic devices to biochemical analyses. From classic dyes such as cyanines, squaraines, porphyrins, phthalocyanines, and others to the newest functional π-conjugation systems, various types of functional dyes are dealt with extensively in the book, focusing especially on the state of the art and the future. Readers will benefit greatly from the scientific context in which organic dyes and pigments are comprehensively explained on the basis of chemistry.

Yousuke Ooyama received his Ph.D. from the Graduate School of Science, Kochi University, Japan, in 2005. He was also a research fellow of the Japan Society for the Promotion of Science (JSPS) from 2003 to 2005. From 2005 to 2011 he was an Assistant Professor in the group of Prof. Yutaka Harima and in 2011 he was promoted to an Associate Professor in the group of Prof. Joji Ohshita, and since 2017 he has been a Professor of Materials Physical Chemistry at the Graduate School of Engineering, Hiroshima University. He was also a Visiting Researcher in the group of Prof. Lothar Dunsch at the Leibniz Institute for Solid State and Materials Research Dresden (IFW Dresden), Germany, in 2007. His current research interests are in the molecular design and synthesis of mechanofluorochromic (MFC) dyes, organic dye sensitizers for dye-sensitized solar cell (DSSC), photosensitizers for photodynamic therapy (PDT) and fluorescence sensors for water based on photo-induced electron transfer (PET).