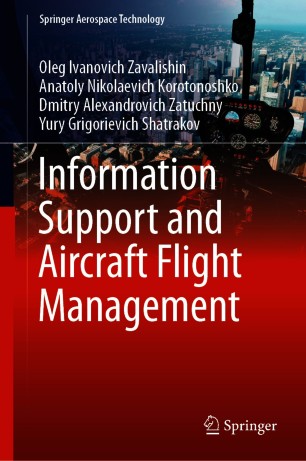 This book presents materials on the implementation of modern technologies for aircraft information support and ground-based radio equipment for flights in the Russian Federation, especially in the Arctic and far Eastern regions, as well as new methods for monitoring the flight of civil aviation aircraft based on the use of local control and correction stations and optical systems that fully meet the requirements of international and domestic organizations for the reliability and integrity of transmitted information. The book is intended for engineering and technical specialists involved in the development, manufacturing and operation of aircraft avionics and ground-based radio electronic flight support systems, as well as graduate students and senior students of radio engineering specialties. It is useful to researchers and professionals whose activities are related to air traffic control.

Oleg Ivanovich Zavalishin is Candidate of technical sciences, General director - General designer of LLC "NPPF Spectr". He is expert on the development and production of aeronautical equipment, land and aircraft equipment, land systems as a functional addition to global satellite navigational systems, local differential systems and landing radio-radar equipment for civil aviation. He is also a member of the council of chief designers, developers and producers of navigational hardware (NAP) for the GNSS.
Anatoly Nikolaevich Korotonoshko graduated from the Moscow Higher Technical School and defended his thesis in 1968 at the Moscow Institute of Instrument Automation.  He has authored more than 70 scientific articles and holds 7 patents. His research interests are in the area of air traffic control and satellite navigation.
Dmitry Alexandrovich Zatuchny is Doctor of technical sciences, Associate Professor and Professor at the Department of Computation Machines, Complexes, Systems and Networks at Moscow State Technical University of Civil Aviation. He is the author of more than 140 scientific works, including 5 monographs, 6 textbooks, 1 patent on an invention and 6 state registered computer programs. He was responsible for a number of research projects on ensuring the functioning of modern navigation systems in civil aviation aircraft and air traffic control.

Yury Grigorievich Shatrakov is Doctor of Technical Sciences, Professor, Russian Federation Honored Worker of Science, Professor at the Academy of Technological Sciences of the Russian Federation and Scientific secretary of JSC "All-Russian Research Institute of radio equipment". He has worked in the field of air navigation since 1963, and his interests focus on ground and onboard systems of radio navigation, instrumental landing, secondary radar, air traffic control systems and training and simulation systems. He has published more than 400 scientific papers.