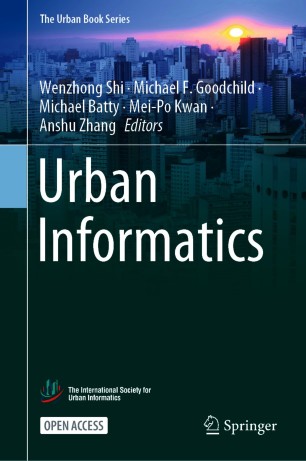 This open access book is the first to systematically introduce the principles of urban informatics and its application to every aspect of the city that involves its functioning, control, management, and future planning. It introduces new models and tools being developed to understand and implement these technologies that enable cities to function more efficiently – to become ‘smart’ and ‘sustainable’. The smart city has quickly emerged as computers have become ever smaller to the point where they can be embedded into the very fabric of the city, as well as being central to new ways in which the population can communicate and act. When cities are wired in this way, they have the potential to become sentient and responsive, generating massive streams of ‘big’ data in real time as well as providing immense opportunities for extracting new forms of urban data through crowdsourcing. This book offers a comprehensive review of the methods that form the core of urban informatics from various kinds of urban remote sensing to new approaches to machine learning and statistical modelling. It provides a detailed technical introduction to the wide array of tools information scientists need to develop the key urban analytics that are fundamental to learning about the smart city, and it outlines ways in which these tools can be used to inform design and policy so that cities can become more efficient with a greater concern for environment and equity.

Wenzhong Shi is the Head and Chair Professor of the Department of Land Surveying and Geo-Informatics, Director of Smart Cities Research Institute, The Hong Kong Polytechnic University. He has researched in GISci and remote sensing for over 30 years. He received Wang Zhizhuo Award, the International Society for Photogrammetry and Remote Sensing (2012), and State Natural Science Award, the State Council, China (2007). He was elected academician of International Eurasian Academy of Sciences in 2019. He has published more than 400 scientific articles and 15 books.
Michael F. Goodchild is Professor Emeritus of Geography at the University of California, Santa Barbara. Until 2012, he held the Jack and Laura Dangermond Chair of Geography and was Director of UCSB’s Center for Spatial Studies. He was elected member of the US National Academy of Sciences in 2002, Foreign Member of the Royal Society, and Corresponding Fellow of the British Academy in 2010. He has published over 550 books and articles.
Michael Batty is Bartlett Professor of Planning at University College London where he is Chair of the Centre for Advanced Spatial Analysis (CASA). From 1979 to 1990, he was Professor of City Planning at the University of Cardiff and from 1990 to 1995, Director of the National Center for Geographic Information and Analysis at the State University of New York at Buffalo. He is a Fellow of the British Academy (FBA) and the Royal Society (FRS). His most recent book is Inventing Future Cities (2018), and he is Editor of the journal Environment and Planning B: Urban Analytics and City Science.
Mei-Po Kwan is Choh-Ming Li Professor of Geography and Resource Management at the Chinese University of Hong Kong. She is Editor of the book series entitled SAGE Advances in Geographic Information Science and Technology. She had served as an Editor of Annals of the American Association of Geographers for 12 years. She is a Fellow of the UK Academy of Social Sciences and the John Simon Guggenheim Memorial Foundation. She has received many prestigious honors and awards, including the Distinguished Scholarship Honors and the Stanley Brunn Award for Creativity in Geography from the American Association of Geographers.
Anshu Zhang is a Research Assistant Professor in the Department of Land Surveying and Geo-Informatics, The Hong Kong Polytechnic University. She has participated in multiple governmental funded projects and is the Principle Investigator of a sub-project under the State Key R&D Scheme of China. She received the China Science and Technology Progress Award in Surveying and Mapping (Grand Award) in 2017.