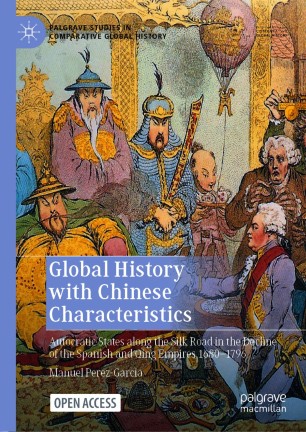 This open access book examines perceptions and dialogues between China and Europe by analysing strategic geopolitical sites which fostered commerce, consumption and socioeconomic networks between China and Europe through a particular case study: Macau, connecting with South China, and Marseille in Mediterranean Europe from 1680 to 1800. How did foreign merchant networks and trans‐national communities of Macau and Marseille operate during the eighteenth century and contribute to somehow transfer respectively European and Chinese socio‐cultural habits and forms in local population? What was the degree and channels of consumption of European goods in China and Chinese goods in Europe? Through these questions the book explores the bilateral Sino‐European trade relations and considers how the trans‐national dimension of exotic commodities changed tastes by creating a new type of global consumerism.

“Manuel Perez-Garcia’s book outlines a truly “global” history of the development of the early modern trade networks linking China and Europe. This is a work that neither follows the heavy-handed “One Belt One Road” school of world history emanating from China nor the need to explain China’s lack of an industrial revolution that dominates Western analysis. Instead, it unfolds a global history through more localized research of market integration between Asia and Europe. Perez-Garcia refocuses our attention on the unofficial links between China and Europe that were the foundation of the pre-modern economy. Conducting global history from the ground up reveals how merchants and merchant networks were the engines of both economic development and new consumer tastes. This is an important work that will provide a framework for future research in global history and urban development.” (James Cook, Associate Director, Asian Studies Center, University of Pittsburgh, USA)

“In a world where global has become the synonym of all that is modern and up-to-date, this trend has not left history and academia out of its influence. Global History with Chinese Characteristics. Autocratic States along the Silk Road in the Decline of the Spanish and Qing Empire 1680-1796 is one of the finest works of its kind. Dr. Manuel Perez Garcia, one of the leading historians in the field, confronts the existing narratives of global history and pursues the creation of a systematized guideline on methodology and approaches to various readers, academic and even casual. This masterpiece shows the light at the end of the tunnel for historians who seem to believe that a new age of global history is approaching.” (Liu Shiyung, Adjunct Professor, Asian Studies Center, University of Pittsburgh, USA, and Distinguished Professor, School of Humanities, Shanghai Jiao Tong University, China)

“Manuel Perez-Garcia argues that Chinese history must be viewed in global context and that Sinocentrism is no improvement over Eurocentrism. His theoretical/methodological framework is used to construct a new case study that compares economic axes of Macao-Canton vis-à-vis Marseille-Seville, both micro-scale areas beyond the dominion of mercantilist and autocratic states of Qing China and Bourbon Spain. Perez-Garcia analyzes the state capacity of Qing China via a new “power paradox theory” and “supremacy dilemma,” which demonstrates that state interventionism entails weak governance. Empirical information gleaned from trade records, probate-inventories, local gazetteers, imperial edicts, and manuscripts are entered into a huge GECEM Project database (an alternative to abstract and misleading macroeconomic constructions, such as GDP estimates). Based upon considerable first-hand experience at Chinese and European universities, Perez-Garcia reveals a database path forward for global histories while acknowledging unique Chinese characteristics.” (Dennis O. Flynn, Emeritus Professor, University of the Pacific, USA)

“This is a refreshing new study on global history with “Chinese characteristics,” in which the author argues that the present regime in China has created an all-encompassing “New Silk Road” template that dictates how Chinese scholars rewrite their global past and political leaders frame economic strategies. In this well-researched book, richly illustrated with maps, grafts and tables, the author has a keen eye for pointing out critical issues and raising important questions concerning China’s past and present global economic policies. While not everyone will agree with his conclusions about the Great Divergence, Oriental despotism, and the viability of China’s 18th century Age of Prosperity, the questions he raises will undoubtedly stimulate further debates on these important topics. The book is well worth the read.” (Robert J. Antony, Professor, School of History and Culture, Shandong University, China)

“Another new approach to global history has been born here. The uniqueness of this book is that it is an analysis of Chinese socio-economic history combined with a perspective on Chinese political philosophy. A comparison of Chinese socioeconomic development with that of Europe, including a vision on mutual influence after the Great Divergence, makes us think about how the complex world system can grow in the same period with elements in common or in different ways. Readers will find this book very helpful when they try to understand Chinaʼs current strategy in the international environment.” (Mihoko Oka, Associate Professor, Historiographical Institute, The University of Tokyo, Japan)

“Manuel, a Spanish academic who completed his PhD in Italy but spent the last decade as a full time academic in China, has written a remarkable and unique book in Global History. While much of the global history written in the West aims at correcting Eurocentric bias, Manuel's book also elaborates and debunks the myth of Sino-centrism in the Chinese historiography. Through a careful archival based study of the trading networks of Macao and Marseilles in the early modern era, the book offers an intimate and balanced portrayal of global history linking the world with the local, the macro with the micro. All in all, a stimulating read.” (Debin Ma, Professor, Hitotsubashi University, Japan)

“Exploiting a large mass of original documents: account books, commercial correspondence, Perez-Garcia’s highly scholarly volume revisits the question of the great divergence between China and Europe by insisting on the role of institutions and the weak capacity of the imperial administration. It draws our attention to the role of local actors, their practices and the constraints within which they operate. Focusing on exchanges between Macao and Marseille, the book magistrally delineates the role of trading networks struggling with bureaucratic empires and offers a sophisticated account of the socio-economic stakes in late imperial China.” (François Gipouloux, Emeritus Research Director, National Centre for Scientific Research, France)