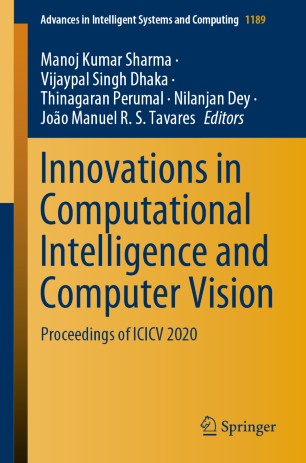 Part of the Advances in Intelligent Systems and Computing book series (AISC, volume 1189)

Dr. Manoj Kumar Sharma is an enthusiastic and motivating technocrat with 13 years of academic experience. He is strong at technical fixes and impresses by his ability to design solutions. Fostering innovation and providing a nurturing eco-system for budding entrepreneurs is his key thrust area. He lays strong emphasis on automation projects for society and industry. He has published more than 46 research papers in different national/international journals and conferences. His research interests include machine learning, artificial intelligence, image processing, pattern recognition and cryptography. He has organized 2 international conferences in 2017 and 2018. He has served as Organizing Secretary and is TPC member in number of conferences including IEEE and Springer. He is a reviewer in different journals of repute from Springer, Elsevier, IEEE and many more. Dr. Sharma has delivered guest lectures at different national/international conferences in India and abroad.

Dr. Dhaka is an enthusiastic and motivating technocrat with 15 years of industrial and academic experience. In his able leadership, students have won many prizes at the national level, e.g. Aero India Drone Competition, Pravega at IISc Bengaluru and Innovative Research prize at IIT Bombay. He lays strong emphasis on automation projects for university, developed by students, and has been successful in deploying 6 such projects in university. He has served on various key positions including Director of Innovations, Dean of Academics, Chief Editor for International Journal and Head of Department. He has more than 80 publications in journals of great repute and guided 10 research scholars to earn Ph.D. His research interests include machine learning, artificial intelligence, image processing and pattern recognition. He has organized 6 international conferences supported by IEEE, ACM, Springer and Elsevier. He is invited by various universities and institutions to deliver keynote addresses and plenary talks. Dr. Dhaka has successfully executed Solar Photo-Voltaic Efficiency Prediction and Enhancement Project funded by SERB (DST, Government of India).

Thinagaran Perumal is the recipient of the 2014 Early Career Award from the IEEE Consumer Electronics Society for his pioneering contribution in the field of consumer electronics. He completed his Ph.D. at Universiti Putra Malaysia, in the area of smart technology and robotics. He is currently an Associate Professor  at the Department of Computer Science, Faculty of Computer Science and Information Technology, Universiti Putra Malaysia. He is also currently appointed as Head of Cyber-Physical Systems in the university and also been elected as Chair of the IEEE Consumer Electronics Society Malaysia Chapter. His research interests are towards interoperability aspects of smart homes and the Internet of things (IoT), wearable computing, and cyber-physical systems. Thinagaran is also heading the National Committee on Standardization for IoT (IEC/ISO TC / G/16) as Chairman since 2018. Some of the eminent works include proactive architecture for IoT systems; development of the cognitive IoT frameworks for smart homes and wearable devices for rehabilitation purposes. He is an active member of the IEEE Consumer Electronics Society and its Future Directions Committee on Internet of Things. He has been invited to give several keynote lectures and plenary talk on the Internet of things in various institutions and organizations internationally. He has published several papers in IEEE conferences and journals and is serving as TPC member for several reputed IEEE conferences. He is an active reviewer for the IEEE Internet of Things Journal, IEEE Communication Magazine, IEEE Sensors Journal, and IEEE Transaction for Automation Science and Engineering, to name a few. He was elected as General Chair for IEEE International Symposium on Consumer Electronics 2017 (ISCE’17) held in Kuala Lumpur.

Dr. Nilanjan Dey, is an Assistant Professor in the Department of Information Technology at Techno India College of Technology, Kolkata, India. He is a Visiting Fellow of the University of Reading, UK.  He was an honorary Visiting Scientist at Global Biomedical Technologies Inc., CA, USA (2012–2015). He was awarded his Ph.D. from Jadavpur University in 2015. He has authored/edited more than 75 books with Elsevier, Wiley, CRC Press, and Springer, and published more than 300 papers. He is the Editor-in-Chief of the International Journal of Ambient Computing and Intelligence, IGI Global, and Associated Editor of IEEE Access and the International Journal of Information Technology, Springer. He is the Series Co-Editor of Springer Tracts in Nature-Inspired Computing, Springer Nature; Series Co-Editor of Advances in Ubiquitous Sensing Applications for Healthcare, Elsevier; Series Editor of Computational Intelligence in Engineering Problem Solving and Intelligent Signal Processing and Data Analysis; CRC. His main research interests include medical imaging, machine learning, computer-aided diagnosis, data mining, etc. He is the Indian Ambassador of the International Federation for Information Processing (IFIP) – Young ICT Group.

João Manuel R.S. Tavares is graduated in Mechanical Engineering from the University of Porto, Portugal (1992). In 1995, he obtained M.Sc. in Electrical and Computer Engineering, in the field of Industrial Informatics, also at the University of Porto. In 2001, he obtained a Ph.D. degree in Electrical and Computer Engineering from the same university, and in 2015 the Habilitation in Mechanical Engineering. From 1995 to 2000, he was Researcher at the Institute of Biomedical Engineering (INEB). Since 2001, he has been Senior Researcher and Project Coordinator  at the Institute of Science and Innovation in Mechanical and Industrial Engineering (INEGI). He was an Assistant Professor in the Department of Mechanical Engineering (DEMec) of the Faculty of Engineering of the University of Porto (FEUP) between 2001 and 2011, and since then, he has been an Associate Professor in the same department. Since 2001, he has been Supervisor and Co-supervisor of several M.Sc. and Ph.D. thesis and Post-doc projects. He is co-author of more than 650 articles in national and international journals and conferences, Co-Editor of 55 international books and Guest Editor of several special issues of international journals. Also, he has been evolved in several research projects, both as Researcher and as Scientific Coordinator. He has been a member of several national and international journal editorial boards, founder and Editor-in-Chief of the T&F journal “Computer Methods in Biomechanics and Biomedical Engineering: Imaging & Visualization”, Editor-in-Chief of the T&F journal “Computer Methods in Biomechanics and Biomedical Engineering”, and Co-founder and Co-Editor of the Springer book series “Lecture Notes in Computational Vision and Biomechanics”. His main research areas include computational vision, medical imaging, computational mechanics, scientific visualization, human–computer interaction and new product development