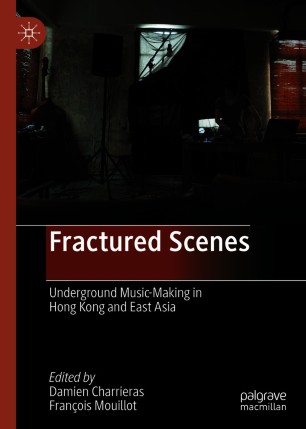 Fractured Scenes is the first extensive academic account of music and sound art practices that fall outside of the scope of ‘mainstream music’ in Hong Kong. It combines academic essays with original interviews conducted with prominent Hong Kong underground/independent musicians and sound artists as well as first hand-accounts by key local scene actors in order to survey genres such as experimental/noise music, deconstructed electronic music, indie-pop, punk, garage rock, sound art and DIY ‘computer’ music (among others). It examines these Hong Kong underground music practices in relief with specific case studies in Mainland China and Japan to begin re-defining the notion of a ‘musical underground’ in the context of contemporary Hong Kong.

Dr. Damien Charrieras is Associate Professor at the School of Creative Media (City University of Hong Kong), one of the most prominent new media art school in Asia. He recently co-published a paper about Hong Kong musical and visual art spaces in the journal Cities. He co-edits a volume on electronic music, policies and spaces around the world and he published several papers on underground musical scenes and electronic music performances, with a focus on South East Asia. He recently published a report for the Hong Kong government on the development of new media expertise in the creative economy of Hong Kong (2019). As a theorist, he is also interested in a variety of topics pertaining to digital creation.
Dr. François Mouillot holds a joint appointment as Research Assistant Professor in the Department of Music and in the Department of Humanities and Creative Writing at the Hong Kong Baptist University, where he is also a member of the Creative Media and Practice Research Cluster. He has written extensively on independent rock and improvised poetry in the Basque region of France, the role of DIY record labels and other institutions in Montreal’s experimental music scenes, and on underground music in Hong Kong.