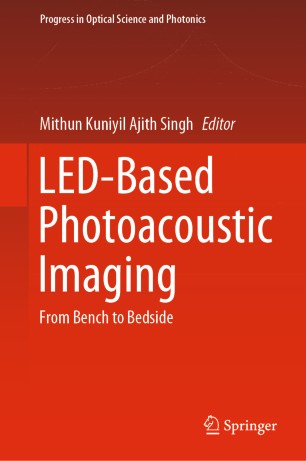 From Bench to Bedside

Part of the Progress in Optical Science and Photonics book series (POSP, volume 7)

This book highlights the use of LEDs in biomedical photoacoustic imaging. In chapters written by key opinion leaders in the field, it covers a broad range of topics, including fundamentals, principles, instrumentation, image reconstruction and data/image processing methods, preclinical and clinical applications of LED-based photoacoustic imaging. Apart from preclinical imaging studies and early clinical pilot studies using LED-based photoacoustics, the book includes a chapter exploring the opportunities and challenges of clinical translation from an industry perspective. Given its scope, the book will appeal to scientists and engineers in academia and industry, as well as medical experts interested in the clinical applications of photoacoustic imaging.

Dr. Mithun Kuniyil Ajith Singh is an engineering scientist with extensive experience in preclinical and clinical photoacoustic and ultrasound imaging. He is presently working as a Research and Business Development Manager at CYBERDYNE, INC, the Netherlands. In his current role, he initiates and coordinates various scientific projects in collaboration with globally renowned research groups, especially focusing on the clinical translation of LED-based photoacoustic imaging technology. Mithun received his Technical Diploma in Medical Electronics from Model Polytechnic College, Calicut, India, in 2004; his Bachelor’s degree in Biomedical Instrumentation and Engineering from SRM University, Chennai, India, in 2008; and his Master’s degree in Bio-photonics from the École normale supérieure de Cachan, France, in 2012. From January 2013 to December 2016, he pursued research for his Ph.D. thesis at the Biomedical Photonic Imaging Group, University of Twente, the Netherlands, under the supervision of Professor Wiendelt Steenbergen.

While working on his Ph.D., he invented a new method called PAFUSion (photoacoustic-guided focused ultrasound) for reducing reflection artifacts and improving contrast and imaging depth in photoacoustic imaging, and demonstrated its potential in clinical pilot studies. Mithun has published over 40 international journal articles and conference proceedings papers. He won the Seno Medical Best Paper Award at the annual conference ‘Photons plus Ultrasound: Imaging and Sensing’ during the SPIE Photonics West 2016 event in San Francisco. As one of many academic achievements and scholarships, SRM University, India, presented him with a Commendation Award for his outstanding contributions to the field of biomedical engineering in 2017. Mithun is currently serving as a reviewer for several leading journals in the field of optics and won Elsevier’s Outstanding Reviewer Award in 2018.