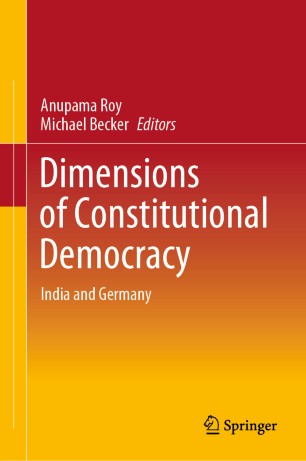 Anupama Roy is a Professor at the Centre for Political Studies, Jawaharlal Nehru University, Delhi. Her research interests include legal studies, the political anthropology of political institutions, political ideas and gender studies. She received her M.Phil. from the University of Delhi and her Ph.D. from the State University of New York at Binghamton, USA. She is the co-author of the book Election Commission of India: Institutionalising Democratic Uncertainties (OUP, 2019) and author of the books Citizenship in India (Oxford India Short Introduction Series, OUP, 2016), Mapping Citizenship in India (OUP, 2010, reprinted 2015) and Gendered Citizenship: Historical and Conceptual Explorations (Orient Longman, 2005, paperback, 2013). She has co-edited Poverty, Gender and Migration in South Asia (Sage, 2008). Her research articles have appeared in various national and international journals including Economic and Political Weekly, Australian Feminist Studies, Critical Asian Studies, Contributions to Indian Sociology and Women’s Studies International Forum. Dr Roy was a senior fellow at the Centre for Women’s Development Studies, before she joined the Centre for Political Studies at JNU. She has been a visiting scholar to Panjab University, Chandigarh, Sydney University, the University of Warwick and University of Wuerzburg, Germany. She received a Sir Ratan Tata post-doctoral fellowship from the Institute of Economic Growth in Delhi, and was a KTP Fellow at the University of Technology, Sydney, Australia.

Michael Becker is a Professor at the Institute for Political and Sociological Studies, Julius Maximilian University, Wuerzburg, Germany. He received his Ph.D. from the Johannes Gutenberg University of Mainz in 1991, and completed his habilitation (post-doctoral degree) at the Otto-Friedrich-University of Bamberg in 2002. Between 2003 and 2005, he was Substitute Professor at the Universities of Bamberg, Landau and Konstanz. Since 2007 he has been a Professor of Political Science at the Institute for Political Science and Sociology at Wuerzburg University. His fields of research include modern and contemporary western political philosophy, constitutional democracy, and modern Indian political thought. Since 2013 he has been a Guest Professor at various Indian universities (Delhi, Chandigarh, Mangalore). He is part of the DAAD-sponsored “Indo-German Partnership” (IGP) and a Member of the BMBF-sponsored “International Centre for Advanced Studies – Metamorphoses of the Political” (ICAS-MP). Some of his major publications include Rechtsstaat und Demokratie (co-editor), Wiesbaden 2001; Verständigungsorientierte Kommunikation und rechtsstaatliche Ordnung (Habilitation), Baden-Baden 2003; Politik und Recht (special issue of Politische Vierteljahresschrift) (co-editor), Wiesbaden 2006; Politische Philosophie (co-author), Paderborn 2006 (4th ed. 2017); Grundstrukturen der Politik in der Bundesrepublik Deutschland, Opladen 2011; and Politischer Liberalismus und wohlgeordnete Gesellschaften (ed.), Baden-Baden 2013.