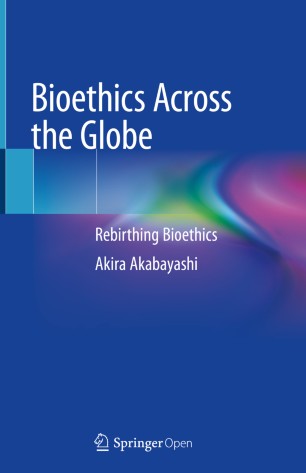 Bioethics Across the Globe

This open access book addresses a variety of issues relating to bioethics, in order to initiate cross-cultural dialogue. Beginning with the history, it introduces various views on bioethics, based on specific experiences from Japan. It describes how Japan has been confronted with Western bioethics and the ethical issues new to this modern age, and how it has found its foothold as it decides where it stands on these issues. In the last chapter, the author proposes discarding the overarching term ‘Global Bioethics’ in favor of the new term, ‘Bioethics Across the Globe (BAG)’, which carries a more universal connotation.

This book serves as an excellent tool to help readers understand a different culture and to initiate deep and genuine global dialogue that incorporates local and global thinking on bioethics. Bioethics Across the Globe is a valuable resource for researchers in the field of bioethics/medical ethics interested in adopting cross-cultural approaches, as well as graduate and undergraduate students of healthcare and philosophy.

As an academic researcher, he has published more than 200 original articles and more than 20 books/textbooks or chapters in English, in addition to many Japanese publications. These include the English textbook, Biomedical Ethics in Asia: A Casebook for Multicultural Learners. McGraw-Hill Education, published in 2010. As an educator, Professor Akabayashi has taught bioethics/medical ethics for over 25 years. Professor Akabayashi also serves as chair of the Research Ethics Committee at the Kyoto University Faculty of Medicine and the University of Tokyo, Faculty of Medicine for more than 15 years. He is also the Founding Director of Office for Human Research Studies where he conducts research ethics consultation at the University of Tokyo. Professor Akabayashi was has also been engaged in clinical ethics consultation as the Founding Director of the Clinical Ethics Center at the University of Tokyo Hospital. A part-time physician, he has worked in hospice care for ten years.

Professor Akabayashi established the first Bioethics Center in Asia (University of Tokyo Center of Biomedical Ethics and Law: CBEL, www.cbel.jp ) in 2003. This center was acknowledged as a Global Center of Excellence in Japan, highlighting his strong leadership. This leadership is also reflected internationally, through Professor Akabayashi’s establishment of the Global Alliance of Biomedical Ethics Centers (GABEX) that comprises world class bioethics centers including The Hastings Center, USA, and the Ethox Center, Oxford University, UK. Work done by this network has resulted in a book, The Future of Bioethics: International Dialogues, edited by Professor Akabayashi (Oxford University Press, Oxford, 2014). His current interest focuses on global bioethics, expanding dialogues among bioethics researchers throughout the world. He has also been also honored as a Fellow of The Hastings Center (USA) in 2008. He was elected as the President of Japan Association for Bioethics in 2017.