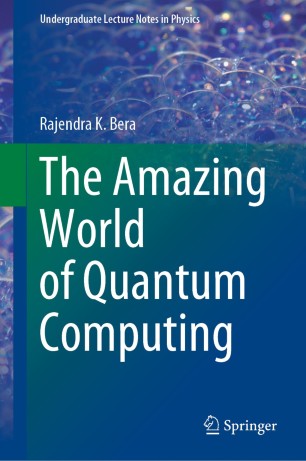 The Amazing World of Quantum Computing

This book discusses the application of quantum mechanics to computing. It explains the fundamental concepts of quantum mechanics and then goes on to discuss various elements of mathematics required for quantum computing. Quantum cryptography, waves and Fourier analysis, measuring quantum systems, comparison to classical mechanics, quantum gates, and important algorithms in quantum computing are among the topics covered.
The book offers a valuable resource for graduate and senior undergraduate students in STEM (science, technology, engineering, and mathematics) fields with an interest in designing quantum algorithms. Readers are expected to have a firm grasp of linear algebra and some familiarity with Fourier analysis.

From 1971 to 1995, Dr. Bera served at the National Aerospace Laboratories, Bangalore, where he worked in aerodynamics, flight dynamics, theory of elasticity, neural networks, science and technology policy, and technology transfer to industry. From 1995 to 2005, he worked at IBM Software Labs, Bangalore, where he developed an R&D group focusing on new technologies and mentored young researchers and inventors. He is the sole inventor on 28 US patents, all assigned to IBM. His patenting areas include compiler optimization, resource allocation, pattern recognition, and static analysis of computer codes. A former member of the New York Academy of Sciences, Dr. Bera is a fellow of the Institution of Engineers (India) and is listed in several editions of Marquis Who’s Who. The sole author of more than 40 research publications in prominent journals, his current research interests include pattern recognition in molecular biology, quantum computing, intellectual property rights, and nonlinear dynamical systems.