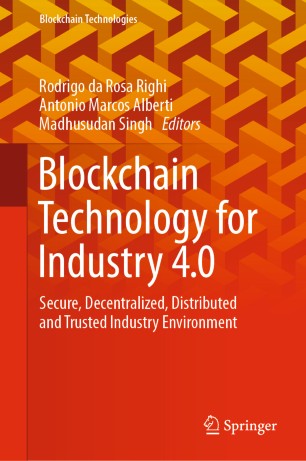 This book explores recent advances in blockchain technology and its impact on Industry 4.0 via advanced technologies. It provides an in-depth analysis of the step by step evolution of Industry 4.0 and blockchain technologies for creating the next-generation, secure, decentralized, distributed and trusted industry environment and enhancing the productivity of industries. The book describes how blockchain technology makes the industrial internet (Industry 4.0) a transparent, reliable and secure environment for people, processes, systems, and services, presenting a strong, technological and conceptual framework and roadmap for decision-makers involved in the transformation of any area of industry.

Dr. Rodrigo da Rosa Righi is a Professor at the University of Vale do Rio dos Sinos (Unisinos), Brazil. He concluded his postdoctoral studies at KAIST - Korean Advanced Institute of Science and Technology, South Korea, focusing on RFID and cloud computing. He obtained his M.S. and Ph.D. degrees in Computer Science from the Federal University of Rio Grande do Sul, Brazil, in 2005 and 2009, respectively. His research interests include performance analysis, process scheduling and migration, load balancing and resource provisioning on cluster, grid and cloud environments. In addition, he has expertise in mobile and embedded computing systems that employ Linux or WinCE operating systems. Further, he is a senior member of IEEE Computer Society and a member of ACM.

Dr. Antonio Marcos Alberti has been the Head of the ICT Lab and an Associate Professor and researcher at the Instituto Nacional de Telecomunicações, INATEL, Brazil, since 2004. In 2012, he was a Visiting Researcher at the Future Internet Department of ETRI, in South Korea. He received his M.Sc. and Ph.D. degrees in Electrical Engineering from Campinas State University (Unicamp), Campinas, SP, Brazil, in 1998 and 2003, respectively. Since 2008, he has been designing and implementing a future internet architecture known as NovaGenesis. His research interests are future internet, blockchain technology, artificial intelligence, and computer networks.

Dr. Madhusudan Singh (SMIEEE) is currently an Assistant Professor at the School of Technology Studies, Endicott College of International Studies at Woosong University, Daejeon, South Korea. Prior to that, Dr. Singh worked as a Research Professor at Yonsei Institute of Convergence Technology, Yonsei University (June 2016 – Feb 2018). He also served as a Senior Engineer at the Research and Development department of Samsung Display, Yongin-Si, South Korea for over four years. He received his Ph.D. degree at the Dept. of Ubiquitous IT, Dongseo University (DSU) (Busan, South Korea), and he completed his dual Master's M.Tech. (Master of Technology) at the Dept. of IT, with specialization in Software Engineering at the Indian Institute of Information Technology-Allahabad(IIIT-A), India and MS at the Dept. of Computer Science at Uttar Pradesh (State) Technical University(UPTU), Lucknow, India. He received his BS degree from the Dept. of Computer Applications at Purvanchal University, India. Currently, he is a senior member of the IEEE (SMIEEE) and member of ACM, IEEE Standard, IEEE Blockchain, and numerous other research and scientific organizations. He is also an editor/reviewer/TPC member of multiple international journals/conferences. He has published more than 50 refereed research articles, over 9 international patents, and delivered more than 15 technical talks. His fields of research include wireless networks, cyber security, blockchain technology, Internet of Things, machine learning, software engineering, and computer vision