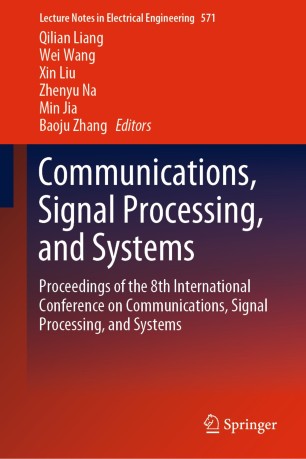 Proceedings of the 8th International Conference on Communications, Signal Processing, and Systems

This book brings together papers from the 2019 International Conference on Communications, Signal Processing, and Systems, which was held in Urumqi, China, on July 20–22, 2019. Presenting the latest developments and discussing the interactions and links between these multidisciplinary fields, the book spans topics ranging from communications to signal processing and systems. It is chiefly intended for undergraduate and graduate students in electrical engineering, computer science and mathematics, researchers and engineers from academia and industry, as well as government employees.

Dr. Qilian Liang is a Distinguished University Professor in the Department of Electrical Engineering, University of Texas, at Arlington (UTA), USA, where he has been working since August 2002. Prior to this, he was a member of the technical staff at Hughes Network Systems Inc. in San Diego, California. Dr. Liang received his B.S. degree from Wuhan University, China, in 1993; his M.S. degree from Beijing University of Posts and Telecommunications, China, in 1996; and a Ph.D. degree from the University of Southern California (USC), Los Angeles, USA, in May 2000, all in Electrical Engineering. His research interests include communications, signal processing and fuzzy logic systems. Dr. Liang has published more than 330 journal and conference papers and 9 book chapters and has 6 U.S. patents pending. He received 2002 IEEE Transactions on Fuzzy Systems Outstanding Paper Award; 2003 U.S. Office of Naval Research (ONR) Young Investigator Award; 2005 UTA College of Engineering Outstanding Young Faculty Award; 2007, 2009, 2010 U.S. Air Force Summer Faculty Fellowship Program Award; 2012 UTA College of Engineering Excellence in Research Award; 2013 UTA Outstanding Research Achievement or Creative Activity Award and was inducted into UTA Academy of Distinguished Scholars in 2015. He is an IEEE Fellow.